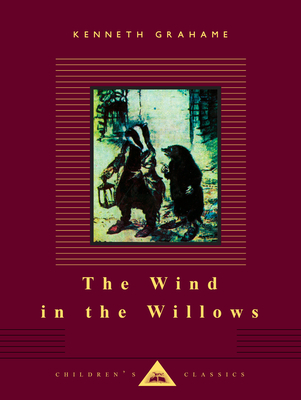 The Wind in the Willows (Everyman's Library Children's Classics Series)

Since its first publication in 1908, generations of adults and children have cherished Kenneth Grahame’s classic, The Wind in the Willows.

In this entrancing, lyrical world of gurgling rivers and whispering reeds live four of the wisest, wittiest, noblest, and most lovable creatures in all literature—Rat, Mole, Badger, and Toad of Toad Hall. Like true adventurers, they glory in life’s simplest pleasures and natural wonders. But it is Toad, cocky and irrepressible in his goggles and overcoat, whose passion for motorcars represents the free and fearless spirit in all of us; just as it’s Toad’s downfall that inspires the others to test Grahame’s most precious theme—the miracle of loyalty and friendship.

“It is what I call a Household Book . . . a book which everybody in the household loves, and quotes continually ever afterwards; a book which is read aloud to every new guest.”
–A. A. Milne

Kenneth Grahame (1859-1932) was born in Edinburgh, Scotland. When he was not yet five, his mother died of scarlet fever, after which he was sent to his maternal grandmother's house at Cookham Dean near the Thames. His father virtually abandoned his children to relatives, and Kenneth was sent to boarding school in Oxford at the age of nine. Disappointed of his dream of going on to university, he was instead given a job as a clerk in the Bank of England, where ultimately he became Secretary. He achieved fame as a writer with his recollections of childhood, The Golden Age and Dream Days published in 1895 and 1898. The Wind in the Willows, turned down by several publishers as a poor sequel to the earlier books, began as a bedtime story told to his only child, Alistar, whose tragic death at twenty was so great a sorrow that he and his wife lived in eccentric seclusion thereafter. In a life of much sadness it seems that all he found pleasurable in this world he put into the best-loved children's book of all time.
Loading...
or
Not Currently Available for Direct Purchase