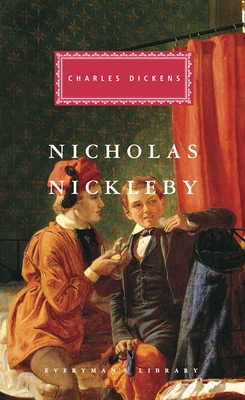 Charles Dickens had an understanding of mid-Victorian society second to none, and genius and energy massive enough to make the absurdities and terrors of that society come alive on the page. Nicholas Nickleby, with its episodes of chicanery in finance and education, and the dramatic intensity with which it tells the story of its openhearted young protagonist and its frightening villain, the magnificently rendered Ralph Nickleby, represents Dickens at his clear-eyed, indignant, and mesmerizing best.

When Nicholas Nickleby is left penniless by the death of his father, he appeals to his Uncle Ralph to help him and his mother and sister. But Ralph conceives a violent hatred of the young man, and his schemes of persecution haunt Nicholas through a series of picaresque adventures, including a job as a tutor at a horrific school for unwanted boys run by the cruel Wackford Squeers and a stint as a member of the eccentric Crummles family theater troupe. Without shying away from the grimmer aspects of the world Nicholas encounters on his path to eventual happiness, the story remains one of Dickens’s most high-spirited and exuberant.

Dickens's marriage to Catherine Hoggarth produced ten children but ended in separation in 1858. In that year he began a series of exhausting public readings; his health gradually declined. After putting in a full day's work at his home at Gads Hill, Kent on June 8, 1870, Dickens suffered a stroke, and he died the following day.
Loading...
or support indie stores by buying on