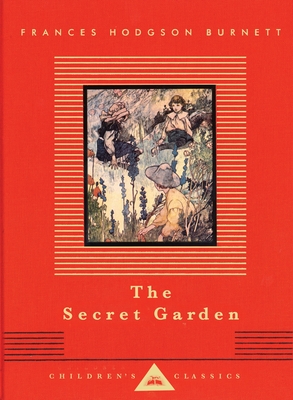 Frances Hodgson Burnett's celebration of the kingdom of earth takes place in a secret garden, where the orphaned Mary Lennox and the invalid boy, Colin, are magically restored to health and well-being by Nature's mysterious living force. The original illustrations, by Charles Robinson, are perfect visual companions to the rich and illuminating text.

“It is only the exceptional author who can write a book about children with sufficient skill, charm, simplicity, and significance to make it acceptable to both young and old. Mrs. Burnett is one of the few thus gifted.”—The New York Times

Frances Hodgson Burnett (1849-1924) was born and grew up in Manchester, but her father died when she was three and in 1865 she emigrated with her mother to Knoxville, Tennessee, where her uncle had already opened a grocery store. Five years later her mother died and – like many other women of her time – she began writing short stories for popular magazines to support her family. Her first novel, That Lass o' Lowrie's (1877), brought her instant fame on both sides of the Atlantic.

In 1873 she had married Swan Burnett, a physician, and it was for the two sons of the marriage that she wrote Little Lord Fauntleroy, which was first serialized in the children's monthly magazine St. Nicholas. When published in book form in October 1886, it went immediately on to the bestseller lists alongside Tolstoy's War and Peace and Rider Haggard's King Solomon's Mines. Mrs. Burnett wrote many other novels, for both children and adults, as well as plays and short stories, but she is best remembered for The Secret Garden (1911) and A Little Princess (1905).

Her marriage to Dr. Burnett ended in divorce in 1898 and two years later she remarried – but, again, the marriage ended, this time in separation. She became an American citizen in 1905, though she travelled frequently to Europe. She died at her home on Long Island a few weeks before her seventy-fifth birthday.
Loading...
or
Not Currently Available for Direct Purchase