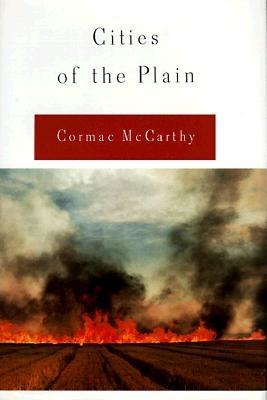 Cities of the Plain

In this final volume of The Border Trilogy, two men marked by the boyhood adventures of All the Pretty Horses and The Crossing now stand together, in the still point between their vivid pasts and uncertain futures, to confront a country changing or already changed beyond recognition.

In the fall of 1952, John Grady Cole and Billy Parham--nine years apart in age, yet with a kinship greater than perhaps they know--are cowboys on a New Mexico ranch encroached upon from the north, at Alamogordo, by the military. To the south, always on the horizon are the mountains of Mexico, looming over El Paso, Ciudad Juárez and all the cities of the plain.
Bound by nature to horses and cattle and range, these two discover that ranchlife domesticity is compromised, for them and the men they work with, by a geometry of loss afflicting old and young alike, those who have survived it and anyone about to try. And what draws one of them across the border again and again, what would bind "those disparate but fragile worlds," is a girl seized by ill fortune, and a love as dangerous as it is inevitable.

This story of friendship and passion is enfolded in a narrative replete with character and place and event--a blind musician, a marauding pack of dogs, curio shops and ancient petroglyphs, a precocious shoe-shine boy, trail drives from the century before, midnight on the highway--and with landforms and wildlife and horses and men, most of all men and the women they love and mourn, men and their persistence and memories and dreams.

With the terrible beauty of Cities of the Plain--with its magisterial prose, humor both wry and out-right, fierce conviction and unwavering humanity--Cormac McCarthy has completed a landmark of our literature and times, an epic that reaches from tales of the old west, the world past, into the new millennium, the world to come.

Praise For Cities of the Plain…

"An American classic to stand with the finest literary achievements of the century."--San Francisco Chronicle

"Grave and majestic.... McCarthy has created an imaginative oeuvre greater and deeper than any single book. Such writers wrestle with the gods themselves." --Washington Post Book World

"Showcases Mr. McCarthy's gifts as an old-fashioned storyteller.... His most readable, emotionally engaging novel yet." --The New York Times

"Soars as few novels have in recent years...a work of which any writer would be proud." --The Philadelphia Inquirer

"If you love classic narrative, quest stories, adventure stories of high order transformed by one of the lapidary masters of contemporary American fiction, now is your hour of triumph."
--Chicago Tribune

"Captures a way of life so unspoken and deep that most people never knew it existed--. [McCarthy] can go places in prose as remote as a mountain pass in a high wind."--The Boston Globe