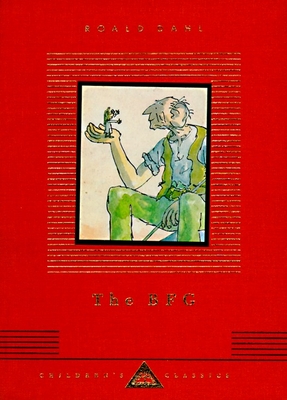 When Sophie is snatched from her orphanage bed by the BFG (Big Friendly Giant), she fears she will be eaten. But instead the two join forces to vanquish the nine other far less gentle giants who threaten to consume earth’s children. This beautiful hardcover gift edition of Dahl's classic features the original illustrations by Quentin Blake, as well as a silk ribbon marker, acid-free paper, gilt stamping on a full-cloth cover, decorative endpapers, and a sewn binding.

Roald Dahl (1916-1990) was born in Llandaff, South Wales, and went to Repton School in England. His parents were Norwegian, so holidays were spent in Norway. As he explains in Boy, he turned down the idea of university in favor of a job that would take him to 'a wonderful faraway place'. In 1933 he joined the Shell Company, which sent him to Mombasa in East Africa. When World War II began in 1939 he became a fighter pilot and in 1942 was made assistant air attaché in Washington, where he started to write short stories. His first major success as a writer for children was in 1964. Thereafter his children's books brought him increasing popularity, and when he died children mourned the world over, particularly in Britain where he had lived for many years.The BFG is dedicated to the memory of Roald Dahl's eldest daughter, Olivia, who died from measles when she was seven – the same age at which his sister had died (fron appendicitis) over forty years before. Quentin Blake, the first Children’s Laureate of the United Kingdom, has illustrated most of Roald Dahl’s children’s books.
Loading...
or support indie stores by buying on