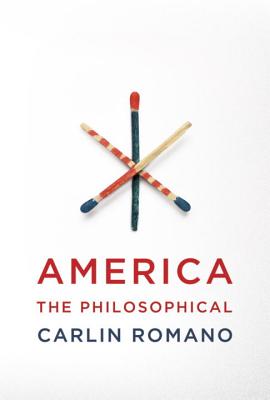 A bold, insightful book that rejects the myth of America the Unphilosophical, arguing that America today towers as the most philosophical culture in the history of the world, an unprecedented marketplace of truth and argument that far surpasses ancient Greece or any other place one can name.
With verve and keen intelligence, Carlin Romano—Pulitzer Prize finalist, award-winning book critic, and professor of philosophy—takes on the widely held belief that ours is an anti–intellectual society. Instead, while providing a richly reported overview of American thought, Romano argues that ordinary Americans see through phony philosophical justifications faster than anyone else, and that the best of our thinkers abandon artificial academic debates for fresh intellectual enterprises, such as cyberphilosophy. Along the way, Romano seeks to topple philosophy’s most fiercely admired hero, Socrates, asserting that it is Isocrates, the nearly forgotten Greek philosopher who rejected certainty, whom Americans should honor as their intellectual ancestor.
America the Philosophical introduces readers to a nation whose existence most still doubt: a dynamic, deeply stimulating network of people and places drawn together by shared excitement about ideas. From the annual conference of the American Philosophical Association, where scholars tack wiseguy notes addressed to Spinoza on a public bulletin board, to the eruption of philosophy blogs where participants discuss everything from pedagogy to the philosophy of science to the nature of agency and free will, Romano reveals a world where public debate and intellectual engagement never stop. And readers meet the men and women whose ideas have helped shape American life over the previous few centuries, from well-known historical figures like William James and Ralph Waldo Emerson, to modern cultural critics who deserve to be seen as thinkers (Kenneth Burke, Edward Said), to the iconoclastic African American, women, Native American, and gay mavericks (Cornel West, Susan Sontag, Anne Waters, Richard Mohr) who have broadened the boundaries of American philosophy.
Smart and provocative, America the Philosophical is a rebellious tour de force that both celebrates our country’s unparalleled intellectual energy and promises to bury some of our most hidebound cultural clichés.

Carlin Romano, Critic-at-Large of "The Chronicle of Higher Education" and literary critic of "The Philadelphia Inquirer "for twenty-five years, is Professor of Philosophy and Humanities at Ursinus College. His criticism has appeared in "The Nation, The New Yorker, The Village Voice, Harper's, The American Scholar, Salon, The Times Literary Supplement," and many other publications. A former president of the National Book Critics Circle, he was a finalist for the 2006 Pulitzer Prize in Criticism, cited for "bringing new vitality to the classic essay across a formidable array of topics." He lives in Philadelphia.

Praise For America the Philosophical…

“In an age when many debates are high-pitched screeds, how counterintuitive it is to argue that American philosophical thought is booming. But that’s trademark Romano . . . Romano turns this subject into a narrative of people brought together through their love of ideas.”
-Elizabeth Taylor, Chicago Tribune

“Both scholarly and entertaining—learned and stimulating—to an equal and extraordinary degree. America the Philosophical is one of the books of the year . . . A hugely enlightening compendium of intellectual heresy.”
-Jeff Simon, The Buffalo News

“A comprehensive intellectual history from Emerson to Rawls.”
-The New Yorker

“A high-speed tour of America’s big thinkers . . . Romano is a cheerful and exuberant guide.”
-Jonathan Rée, The Philadelphia Inquirer

“Admirable . . . Romano writes with the snap of a journalist.”
-Thomas Meaney, The Wall Street Journal

“Fascinating portraits of unjustly obscure intellectual figures, curated by a writer with a talent for the telling example.”
-John Kappes, The Cleveland Plain Dealer

“Stimulating . . . Graceful . . . This exuberant book succeeds in filling one’s mind with the excitement of ideas duking it out.”
-Drew DeSilver, The Seattle Times

“Genuinely exciting and provocative . . . If Romano wanted to discombobulate the traditional landscape of American philosophy, he achieved his goal.”
-Umberto Eco

“Romano’s remarkable book stands out in terms of ambition, breadth, provocativeness, and, when needed, a delicate touch.”
-Howard Gardner, author of Truth, Beauty and Goodness Reframed

“Comprehensive and certain to be controversial . . . Romano’s grip on his subject is fierce, and his tone, though critical throughout (he does not just summarize; he assesses), is occasionally light . . . A tour de force—encyclopedic, entertaining and enlightening.”
-Starred review, Kirkus

“Engaging . . . With illuminating anecdotes and an addictive prose style, Romano renders complex ideas lucid without sacrificing depth of understanding or his splendid sense of humor. His breathtaking intellectual range and passion will make every reader want to be a philosopher.”
-Starred review, Publishers Weekly

“Part love letter, part hand grenade, Romano’s commentary is sure to delight and infuriate in a way that will underscore its thesis.”
-Booklist

“This wide-ranging survey is likely to be of interest to all readers interested in philosophy and American thought in the 20th and 21st centuries.”
-Library Journal