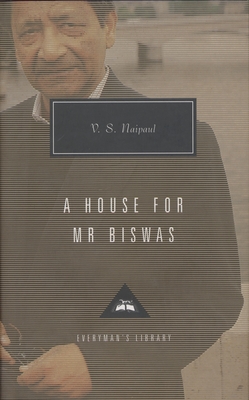 The book that turned the gentle satirist of the Caribbean into a major literary figure, in a hardcover edition with an introduction by Karl Miller.

His birth ill-omened, his life dominated by fitful, comic struggles and resentful truces with those to whom he is obligated, Mr. Mohun Biswas of Trinidad, toward the end of his forty-sixth year on earth, triumphantly purchases his own house and becomes his own man. Around this supremely simple story, V. S. Naipaul builds one of the few virtually perfect novels in our language, a book that is--in the balance struck between its small incidents and its large, overarching patterns, in the ironic beauty of its prose--at once compelling, mysterious, and classical. It is also one of the few novels in any language that transcend their own genre. By the end of A House for Mr. Biswas we are reading not only a tragicomic masterpiece of social manners in a postcolonial society but a tremendous parable about the individual self in its enslavement to time and change, and in its search for freedom.

V. S. Naipaul was born in Trinidad in 1932. He is the author of more than twenty books of fiction and non-fiction and the recipient of numerous honours, including the Nobel Prize in 2001, the Booker Prize in 1971, and a knighthood for services to literature in 1990. He lives in Wiltshire, England.
Loading...
or support indie stores by buying on