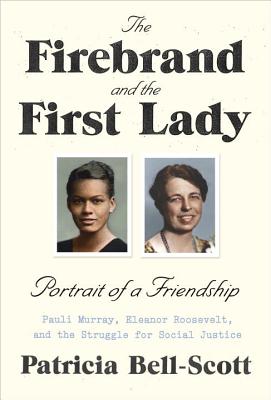 The Firebrand and the First Lady

Portrait of a Friendship: Pauli Murray, Eleanor Roosevelt, and the Struggle for Social Justice

A groundbreaking book—two decades in the works—that tells the story of how a brilliant writer-turned-activist, granddaughter of a mulatto slave, and the first lady of the United States, whose ancestry gave her membership in the Daughters of the American Revolution, forged an enduring friendship that changed each of their lives and helped to alter the course of race and racism in America.

Pauli Murray first saw Eleanor Roosevelt in 1933, at the height of the Depression, at a government-sponsored, two-hundred-acre camp for unemployed women where Murray was living, something the first lady had pushed her husband to set up in her effort to do what she could for working women and the poor. The first lady appeared one day unannounced, behind the wheel of her car, her secretary and a Secret Service agent her passengers. To Murray, then aged twenty-three, Roosevelt’s self-assurance was a symbol of women’s independence, a symbol that endured throughout Murray’s life.

Five years later, Pauli Murray, a twenty-eight-year-old aspiring writer, wrote a letter to Franklin and Eleanor Roosevelt protesting racial segregation in the South. The president’s staff forwarded Murray’s letter to the federal Office of Education. The first lady wrote back.

Murray’s letter was prompted by a speech the president had given at the University of North Carolina, Chapel Hill, praising the school for its commitment to social progress. Pauli Murray had been denied admission to the Chapel Hill graduate school because of her race.

“Does it mean that Negro students in the South will be allowed to sit down with white students and study a problem which is fundamental and mutual to both groups? Does it mean that the University of North Carolina is ready to open its doors to Negro students . . . ? Or does it mean, that everything you said has no meaning for us as Negroes, that again we are to be set aside and passed over . . . ?”

Eleanor Roosevelt wrote to Murray: “I have read the copy of the letter you sent me and I understand perfectly, but great changes come slowly . . . The South is changing, but don’t push too fast.”

So began a friendship between Pauli Murray (poet, intellectual rebel, principal strategist in the fight to preserve Title VII of the 1964 Civil Rights Act, cofounder of the National Organization for Women, and the first African American female Episcopal priest) and Eleanor Roosevelt (first lady of the United States, later first chair of the United Nations Commission on Human Rights, and chair of the President’s Commission on the Status of Women) that would last for a quarter of a century.

Drawing on letters, journals, diaries, published and unpublished manuscripts, and interviews, Patricia Bell-Scott gives us the first close-up portrait of this evolving friendship and how it was sustained over time, what each gave to the other, and how their friendship changed the cause of American social justice.

Praise For The Firebrand and the First Lady: Portrait of a Friendship: Pauli Murray, Eleanor Roosevelt, and the Struggle for Social Justice…

“Thorough and engaging . . . Amazement, annoyance, impatience, assistance, resistance, challenge, focus, concern and love flowed in the decades of correspondence between Murray and Roosevelt . . . Their lives were each the richer for it, and our lives are richer for the accounting of their friendship in this important book.”
–Julianne Malveaux, The Washington Post

“[Written] with the grace, compassion and diligent attention to detail that characterized both its principal subjects . . . ‘The Firebrand’ is someone whose inspiration is sorely needed – and not only by black women.”
–Gene Seymour, USA TODAY

“It’s safe to say that The Firebrand and the First Lady will deservedly capture several literary awards this year. More than two decades in the making . . . a definitive biography of Murray, a trailblazing legal scholar and a tremendous influence on Mrs. Roosevelt, who deepened her commitment to civil rights until her death in 1962.”
–Patrik Henry Bass, Essence

“The extraordinary life of Pauli Murray, activist, poet, teacher, priest and "firebrand" for all seasons, is beautifully detailed in Patricia Bell-Scott's book. Pauli clearly won the heart of Eleanor Roosevelt as both women sought to advance the cause of Negro rights--indeed all human rights---during their lives. Their history together reverberates today as the fight for equality continues, making this book important reading for all of us."
– Jane Alexander, award winning actress, "Eleanor and Franklin" and "The White House Years"

“Bell-Scott shines a bright light on this significant relationship. A fresh look at Eleanor Roosevelt and a fascinating exploration of a cherished, mutually beneficial friendship.”
–Kirkus, Starred Review

“What an exquisite book! Patricia Bell-Scott has done the painstaking research on two women who in many respects couldn’t have been more different, but in at least one respect – their unique friendship – shared a passion for truth . . . The particular lens through which Bell-Scott has examined the Struggle for Social Justice is their incredible friendship, filled with initial shyness and formality, spurred on by the experiences of injustice, ripened through hard work, including difficult exchanges, and brought to fruition in the lasting legacies of each. As the Episcopal Church, other religious groups, and the entire country continues to deal with the evils of racism and their lasting and destructive effects, Patricia Bell-Scott has given us a book that will inspire and give hope to all who read it.”
– The Rt. Rev. Mary D. Glasspool, Bishop Suffragan, Diocese of Los Angeles.

“Bold, fast-paced, and vividly written, Patricia Bell-Scott's dual portrait of Pauli Murray and Eleanor Roosevelt significantly enhances the story of two luminous activists who learned much from each other across the color line.  This splendid book gives us significant hope for the future as we continue to struggle for justice, peace and freedom.”
– Blanche Wiesen Cook, author of Eleanor Roosevelt, I, II, III forthcoming

“Presented against the backdrop of social activism, the dual life stories of the unheralded Pauli Murray and Eleanor Roosevelt told in Patricia Bell-Scott’s important book should inspire all readers.  Rarely has a friendship been dissected and analyzed with such verve and open-eyed compassion.”
–Wil Haygood, author of Showdown: Thurgood Marshall and the Supreme Court Nomination that Changed America

“A fresh look at a fascinating friendship between two vivid individuals from very different worlds — as well as a chronicle of the age-old conflict between the highest ideals and the art of the possible.”
– Geoffrey C. Ward, author of The Roosevelts: An intimate History

“With roots in personal contact, this extraordinary book of the extraordinary friendship between two extraordinary women is biography at its best: intimate while revealing of society in its time.  Patricia Bell-Scott sees all, and her view is both engrossing and encouraging.
– Nell Irvin Painter, author of Sojourner Truth, A Life, A Symbol