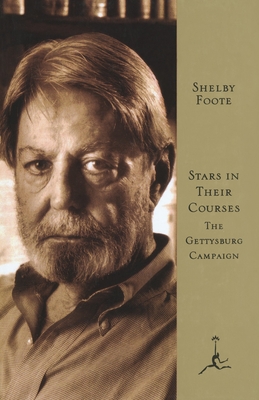 Stars in Their Courses

A matchless account of the Battle of Gettysburg, drawn from Shelby Foote’s landmark history of the Civil War

Shelby Foote’s monumental three-part chronicle, The Civil War: A Narrative, was hailed by Walker Percy as “an unparalleled achievement, an American Iliad, a unique work uniting the scholarship of the historian and the high readability of the first-class novelist.”

Here is the central chapter of the central volume, and therefore the capstone of the arch, in a single volume. Complete with detailed maps, Stars in Their Courses brilliantly recreates the three-day conflict: It is a masterly treatment of a key great battle and the events that preceded it—not as legend has it but as it really was, before it became distorted by controversy and overblown by remembered glory.

Shelby Foote was an American historian and novelist. He was born on November 7, 1916, in Greenville, Mississippi, and attended school there until he entered the University of North Carolina. During World War II he served as a captain of field artillery but never saw combat. After World War II he worked briefly for the Associated Press in their New York bureau. In 1953 he moved to Memphis, where he lived for the remainder of his life. Foote was the author of six novels: Tournament, Follow Me Down, Love in a Dry Season, Shiloh, Jordan County, and September, September. He is best remembered for his 3-volume history The Civil War: A Narrative, which took twenty years to complete and resulted in his being a featured expert in Ken Burns' acclaimed PBS documentary, The Civil War. Over the course of his writing career, Foote was also awarded three Guggenheim fellowships. Shelby Foote died in 2005 at the age of 88.
Loading...
or support indie stores by buying on