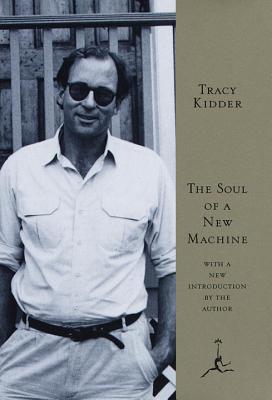 The Soul of a New Machine

Winner of the Pulitzer Prize and the American Book Award, The Soul of a New Machine was a bestseller on its first publication in 1981. With the touch of an expert thriller writer, Tracy Kidder recounts the feverish efforts of a team of Data General researchers to create a new 32-bit superminicomputer. A compelling account of individual sacrifice and human ingenuity, The Soul of a New Machine endures as the classic chronicle of the computer age and the masterminds behind its technological advances.
"A superb book," said Robert Pirsig, author of Zen and the Art of Motorcycle Maintenance. "All the incredible complexity and chaos and exploitation and loneliness and strange, half-mad beauty of this field are honestly and correctly drawn." The Washington Post Book World said, "Kidder has created compelling entertainment. He offers a fast, painless, enjoyable means to an initial understanding of computers, allowing us to understand the complexity of machines we could only marvel at before, and to appreciate the skills of the people who create them."
The Modern Library has played a significant role in American cultural life for the better part of a century. The series was founded in 1917 by the publishers Boni and Liveright and eight years later acquired by Bennett Cerf and Donald Klopfer. It provided the foundation for their next publishing venture, Random House. The Modern Library has been a staple of the American book trade, providing readers with affordable hardbound editions of important works of literature and thought. For the Modern Library's seventy-fifth anniversary, Random House redesigned the series, restoring as its emblem the running torch-bearer created by Lucian Bernhard in 1925 and refurbishing jackets, bindings, and type, as well as inaugurating a new program of selecting titles. The Modern Library continues to provide the world's best books, at the best prices.

Tracy Kidder has written a new Introduction to this Modern Library edition.