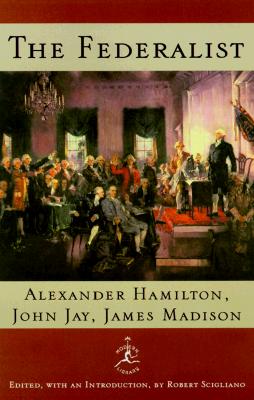 A Commentary on the Constitution of the United States

The series of essays that comprise The Federalist constitutes one of the key texts of the American Revolution and the democratic system created in the wake of independence. Written in 1787 and 1788 by Alexander Hamilton, James Madison, and John Jay to promote the ratification of the proposed Constitution, these papers stand as perhaps the most eloquent testimonial to democracy that exists. They describe the ideas behind the American system of government: the separation of powers; the organization of Congress; the respective positions of the executive, legislative, and judiciary; and much more. The Federalist remains essential reading for anyone interested in politics and government, and indeed for anyone seeking a foundational statement about democracy and America.

This new edition of The Federalist is edited by Robert Scigliano, a professor in the political science department at Boston College. His substantive Introduction sheds clarifying new light on the historical context and meaning of The Federalist. Scigliano also provides a fresh and definitive analysis of the disputed authorship of several sections of this crucial work.


Praise For The Federalist: A Commentary on the Constitution of the United States…

"The best commentary on the principles of government which was ever written."
--Thomas Jefferson

Robert Scigliano is a professor in the political science department at Boston College and a leading authority on the Constitution. "From the Trade Paperback edition."
Loading...
or
Not Currently Available for Direct Purchase