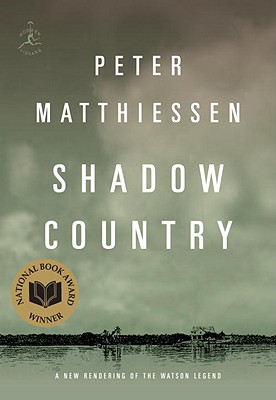 Peter Matthiessen’s great American epic–Killing Mister Watson, Lost Man’s River, and Bone by Bone–was conceived as one vast mysterious novel, but because of its length it was originally broken up into three books. In this bold new rendering, Matthiessen has cut nearly a third of the overall text and collapsed the time frame while deepening the insights and motivations of his characters with brilliant rewriting throughout. In Shadow Country, he has marvelously distilled a monumental work, realizing his original vision.

Inspired by a near-mythic event of the wild Florida frontier at the turn of the twentieth century, Shadow Country reimagines the legend of the inspired Everglades sugar planter and notorious outlaw E. J. Watson, who drives himself relentlessly toward his own violent end at the hands of neighbors who mostly admired him, in a killing that obsessed his favorite son.

Shadow Country traverses strange landscapes and frontier hinterlands inhabited by Americans of every provenance and color, including the black and Indian inheritors of the archaic racism that, as Watson’s wife observed, "still casts its shadow over the nation."

Peter Matthiessen’s lyrical and illuminating work in the Watson narrative has been praised highly by such contemporaries as Saul Bellow, William Styron, and W. S. Merwin. Joseph Heller said "I read it in great gulps, up each night later than I wanted to be, in my hungry impatience to find out more and more."

Praise for Shadow Country
“Shadow Country is altogether gripping, shocking, and brilliantly told, not just a tour de force in its stylistic range, but a great American novel, as powerful a reading experience as nearly any in our literature. This magnificent, sad masterpiece about race, history, and defeated dreams can easily stand comparison with Ralph Ellison's Invisible Man and Robert Penn Warren's All the King's Men. Little wonder, too, that parts of the story of E.J. Watson call up comparisons with Dostoevsky, Conrad, and, inevitably, Faulkner. In every way, Shadow Country is a bravura performance, at once history, fiction, and myth–as well as the capstone to the career of one of the most admired and admirable writers of our time.” — The New York Review of Books

“Magnificent and capacious…. I'll just say right here that the book took my sleeve and like the ancient mariner would not let go. Matthiessen has made his three-part saga into a new thing…. Finally now we have these books welded like a bell, and with Watson's song the last sound, all the elements fuse and resonate….a breathtaking saga.” — The Los Angeles Times

“Peter Mattiessen consolidates his epic masterpiece of Florida -- and crafts something even better…[He] deserves credit for decades of meticulous research and obsessive details and soaring prose that converted the Watson legend into critically acclaimed literature….Anyone wanting an explanation for what happened to Florida can now find it in a single novel, a great American novel.” — Miami Herald

“Matthiessen is writing about one man's life in Shadow Country, but he is also writing about the life of the nation over the course of half a century. Watson's story is essentially the story of the American frontier, of the conquering of wild lands and people, and of what such empires cost….Even among a body of work as magnificent as Matthiessen's, this is his great book.” — St. Petersburg Times

“Shadow Country is a magnum opus. Matthiessen is meticulous in creating characters, lyrical in describing landscapes, and resolute in dissecting the values and costs that accompanied the development of this nation.” --Seattle Times

“Shadow Country” is an ambitious, lasting, and meaningful work of literature that will not soon fade away. It is a testament to Mr. Matthiessen’s integrity as an artist that he felt compelled to return to the Watson material to produce this work and satisfy his original vision….a multifaceted work that can be read variously or simultaneously as a psychological novel, a historical novel, a morality tale, a political allegory, or a mystery. -- East Hampton Star

“Matthiessen’s Watson trilogy is a touchstone of modern American literature…this reworking…is remarkable….Where Watson was a magnificent character before, he comes across as nothing short of iconic here; it’s difficult to find another figure in American literature so thoroughly and confincingly portrayed.” — Publishers Weekly, starred review, Pick of the Week
“Matthiessen has reinvigorated and rejoined the trilogy’s novels…a mosaic about the life and lynch-mob death of a turn-of-the century Florida Everglades sugar planter and serial killer named E. J. Watson — into the 900-plus-page Shadow Country. This is no mere repackaging: Four hundred pages were cut from the novels, previous background characters now tromp to the foreground, and the books’ rangy, Faulknerian essence is rendered more digestible. Deliciously digestible, that is; this is a thick porterhouse of a novel.” — Men’s Journal
"The fiction of Peter Matthiessen is the reason a lot of people in my generation decided to be writers. No doubt about it. SHADOW COUNTRY lives up to anyone's highest expectations for great writing." -- Richard Ford
"Peter Matthiessen is a brilliantly gifted and ambitious writer, an inspired anatomist of the American mythos. His storytelling skills are prodigious and his rapport with his subject is remarkable." -- Joyce Carol Oates
"Peter Matthiessen's work, both in fiction and non-fiction, has become a unique achievement in his own generation and in American literature as a whole. Everything that he has written has been conveyed in his own clear, deeply informed, elegant and powerful prose. The Watson saga-in-the-round, to which he has devoted nearly thirty years, is his crowning achievement. SHADOW COUNTRY, his distillation of the earlier trilogy, is his transmutation of it to represent his original vision. It is the quintessence of his lifelong concerns, and a great legacy." -- W.S. Merwin

Peter Matthiessen has written eight novels, including At Play in the Fields of the Lord (nominated for the National Book Award) and Far Tortuga, and also a book of short stories, On the River Styx. His parallel career as a naturalist and environmental activist has produced numerous acclaimed works of nonfiction, most of them serialized in The New Yorker; these include The Tree Where Man Was Born (another National Book Award nominee) and The Snow Leopard (a National Book Award winner). He was elected to the American Academy of Arts and Letters in 1974.
Loading...
or
Not Currently Available for Direct Purchase