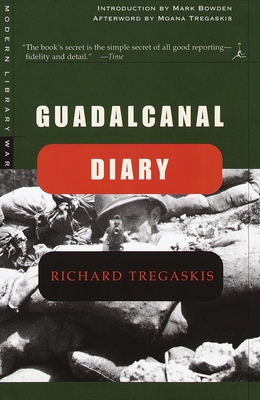 This celebrated classic gives a soldier's-eye-view of the Guadalcanal battles--crucial to World War II, the war that continues to fascinate us all, and to military history in general. Unlike some of those on Guadalcanal in the fall of 1942, Richard Tregaskis volunteered to be there. An on-location news correspondent (at the time, one of only two on Guadalcanal), he lived alongside the soldiers: sleeping on the ground--only to be awoken by air raids--eating the sometimes meager rations, and braving some of the most dangerous battlefields of World War II. He more than once narrowly escaped the enemy's fire, and so we have this incisive and exciting inside account of the groundbreaking initial landing of U.S. troops on Guadalcanal.

With a new Introduction by Mark Bowden--renowned journalist and author of Black Hawk Down--this edition of Guadalcanal Diary makes available once more one of the most important American works of the war.

Richard Tregaskis was a writer and reporter. He received the Overseas Press Club's George Polk Award in 1964 for first-person reporting under hazardous circumstances. He died in 1973.

Moana Tregaskis was a longtime journalist for The New York Times.

"A superb example of war reporting at its best."
--From the Introduction by Mark Bowden

"The book's secret is the simple secret of all good reporting--fidelity and detail."    --Time
or
Buy Here
Copyright © 2020 American Booksellers Association