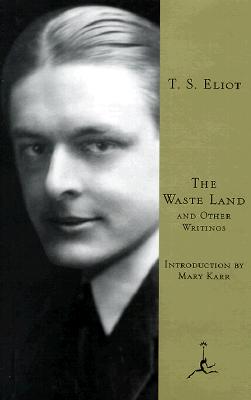 First published in 1922, "The Waste Land" is T.S. Eliot's masterpiece, and is not only one of the key works of modernism but also one of the greatest poetic achievements of the twentieth century. A richly allusive pilgrimage of spiritual and psychological torment and redemption, Eliot's poem exerted a revolutionary influence on his contemporaries, summoning forth a rich new poetic language, breaking decisively with Romantic and Victorian poetic traditions. Kenneth Rexroth was not alone in calling Eliot "the representative poet of the time, for the same reason that Shakespeare and Pope were of theirs. He articulated the mind of an epoch in words that seemed its most natural expression."
As influential as his verse, T.S. Eliot's criticism also exerted a transformative effect on twentieth-century letter, and this new edition of The Waste Land and Other Writings includes a selection of Eliot's most important essays.
In her new Introduction, Mary Karr dispels some of the myths of the great poem's inaccessibility and sheds fresh light on the ways in which "The Waste Land" illuminates contemporary experience.

T.S. Eliot won the Nobel Prize in Literature in 1948. Widely honored for his poetry, criticism, essays and plays, he was a leader of the modernist movement and is today read throughout the world. Mary Karr is the author of the bestselling The Liar's Club and Cherry. She lives in Syracuse, New York.
Loading...
or
Not Currently Available for Direct Purchase