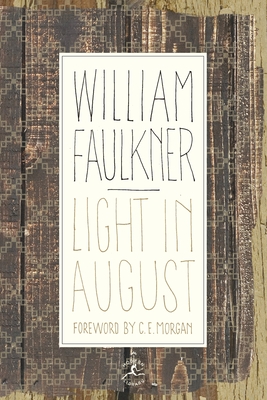 From the Modern Library’s new set of beautifully repackaged hardcover classics by William Faulkner—also available are Snopes, As I Lay Dying, The Sound and the Fury, Absalom, Absalom!, and Selected Short Stories

One of William Faulkner’s most admired and accessible novels, Light in August reveals the great American author at the height of his powers. Lena Grove’s resolute search for the father of her unborn child begets a rich, poignant, and ultimately hopeful story of perseverance in the face of mortality. It also acquaints us with several of Faulkner’s most unforgettable characters, including the Reverend Gail Hightower, plagued by visions of Confederate horsemen, and Joe Christmas, a ragged, itinerant soul obsessed with his mixed-race ancestry. Powerfully entwining these characters’ stories, Light in August brings to life Faulkner’s imaginary South, one of literature’s great invented landscapes, in all of its unerringly fascinating glory. Along with a new Foreword by C. E. Morgan, this edition reproduces the corrected text of Light in August as established in 1985 by Faulkner expert Noel Polk.

William Faulkner was born in New Albany, Mississippi, on September 25, 1897. He published his first book, The Marble Faun (a collection of poems), in 1924, and his first novel, Soldier's Pay, in 1926. In 1949, having written such works as Absalom, Absalom!, As I Lay Dying, Light in August, and The Sound and the Fury, Faulkner was awarded the Nobel Prize for Literature. He also received the Pulitzer Prize for two other novels, A Fable (1954) and The Reivers (1962). From 1957 to 1958 he was Writer-in-Residence at the University of Virginia. He died on July 6, 1962, in Byhalia, Mississippi.

“For all his concern with the South, Faulkner was actually seeking out the nature of man. Thus we must turn to him for that continuity of moral purpose which made for the greatness of our classics.” —Ralph Ellison
or support indie stores by buying on
Copyright © 2020 American Booksellers Association