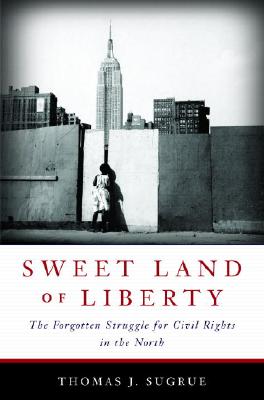 The Forgotten Struggle for Civil Rights in the North

The struggle for racial equality in the North has been a footnote in most books about civil rights in America. Now this monumental new work from one of the most brilliant historians of his generation sets the record straight. Sweet Land of Liberty is an epic, revelatory account of the abiding quest for justice in states from Illinois to New York, and of how the intense northern struggle differed from and was inspired by the fight down South.

Thomas Sugrue’s panoramic view sweeps from the 1920s to the present–more than eighty of the most decisive years in American history. He uncovers the forgotten stories of battles to open up lunch counters, beaches, and movie theaters in the North; the untold history of struggles against Jim Crow schools in northern towns; the dramatic story of racial conflict in northern cities and suburbs; and the long and tangled histories of integration and black power.

Appearing throughout these tumultuous tales of bigotry and resistance are the people who propelled progress, such as Anna Arnold Hedgeman, a dedicated churchwoman who in the 1930s became both a member of New York’s black elite and an increasingly radical activist; A. Philip Randolph, who as America teetered on the brink of World War II dared to threaten FDR with a march on Washington to protest discrimination–and got the Fair Employment Practices Committee (“the second Emancipation Proclamation”) as a result; Morris Milgram, a white activist who built the Concord Park housing development, the interracial answer to white Levittown; and Herman Ferguson, a mild-mannered New York teacher whose protest of a Queens construction site led him to become a key player in the militant Malcolm X’s movement.

Filled with unforgettable characters and riveting incidents, and making use of information and accounts both public and private, such as the writings of obscure African American journalists and the records of civil rights and black power groups, Sweet Land of Liberty creates an indelible history. Thomas Sugrue has written a narrative bound to become the standard source on this essential subject.


Praise For Sweet Land of Liberty: The Forgotten Struggle for Civil Rights in the North…

"Mention the civil rights movement and Birmingham, Selma, and Memphis spring to mind. Rarely do we recall Boston, Pittsburgh, and Cleveland. But there was a civil rights movement in the North, Thomas J. Sugrue reminds us in "Sweet Land of Liberty," and it is impossible to understand race relations today without pondering what we can learn from it. Sugrue's exhaustively researched book brings that movement back to life." --New York Times Book Review

"The election of Barack Obama... calls into question the rigid dichotomies that have defined the American conflict over inequality. Thomas Sugrue's evocative and richly documented new book, Sweet Land of Liberty, is well timed because it addresses the most blinding and fundamental of these dichotomies, that between the southern land of slavery and Jim Crow and the ill-defined rest of the country....The book covers more fresh ground than any history of race has in many years. " --Newsday

“With telling detail and crystalline prose, Sugrue has explained the rise, course of, and difficulties inherent in the freedom struggles of black Americans in the North…. Every American historian needs to read it, and so do policymakers.” --Christianity Today, Book-of-the-Week (11/3/2008)

“Sweeping, well-documented history of the struggle for racial equality above the Mason-Dixon Line.” –Kirkus

"How can an administration elected through an appeal to racial transcendence understand—and combat—the tenacity of racialized injustice? ...Thomas Sugrue’s book might be the timeliest place to start." --New York Observer

"The struggle for civil rights in the North, often overshadowed, gets a comprehensive review...Sugrue's scholarship is most impressive in his analysis of the social, economic, and political currents that swirled around the activists." --Boston Globe

"Sugrue’s book is something to be celebrated. We all know the injustice that pervaded the South and the struggles of Civil Rights movement to overcome it. But many of us don’t know that many similar obstacles still had to be overcome in the North. Sugrue humanizes the history he tells, using individuals’ narratives to remind us of an important truth: “the struggle for racial equality in the North continues.”--Harvard Crimson

"Sweet Land of Liberty... is to be praised for how it highlights the richness, complexity, and endurance of a long black freedom struggle north of the Mason-Dixon Line. It skillfully guides the reader through many twists and turns over nearly a century of civil rights history. It is a profoundly important book that reminds us that the Civil Rights struggle was a national, not simply a regional phenomenon." --ehistory
"Historian Thomas J. Sugrue writes incisively about racial discrimination in the North...richly detailed." --Wilson Quarterly

"In Sweet Land of Liberty, Sugrue supplies a sweeping and searching re-interpretation of the black freedom struggle north of the Mason-Dixon line from the 1920s to the present."
--Tulsa World

“The most important work of American history published this year.” –Religion in American History Blogspot

“With telling detail and crystalline prose, Sugrue has explained the rise, course of, and difficulties inherent in the freedom struggles of black Americans in the North…. Every American historian needs to read it, and so do policymakers.”-- eHistory

"Although dozens of books have been written about the struggle for civil rights in the South, this is one of the first documented histories of the fight that occurred north of the Mason-Dixon Line. The author, a historian at the University of Pennsylvania, sifted through government reports, civil rights group records, the work of black journalists and even the personal accounts of ordinary people to document how our political and social institutions created and maintained racial separation and racial privilege. Covering a span from the 1920s through the present, this unconventional and groundbreaking book examines 80 of the most defining years of America's past. This landmark study is elegantly written and nothing less than a stunning achievement."
--Tuscon Citizen

“Sweet Land of Liberty is a revelatory, daring, and ambitious book that overturns the conventional histories of America’s struggle for civil rights. In this powerful narrative, Thomas Sugrue draws compelling vignettes of the forgotten women and men who fought against the odds for racial justice in the North. He persuasively argues that what happened on the streets, churches, and courtrooms of Chicago, New York, and Los Angeles is every bit as important for understanding modern America as the oft-told histories of the Southern freedom struggle. This is one of those rare books that completely reorients our understanding of the past.”
–Henry Louis Gates, Jr., Alphonse Fletcher, Jr. University Professor, Harvard University

“Thomas Sugrue's crisply written and massively sourced book delivers the northern half of the civil rights story with an authority that should make 'Sweet Land of Liberty' indispensable.”
–David Levering Lewis, author of a biography of the life and times of W.E.B. Du Bois

"With this landmark study, Thomas Sugrue has accomplished the extraordinary: he’s transformed the history of the civil rights movement, shifting it from the south to the north, from Montgomery, Birmingham, and Selma, to Harlem, Levittown, and the mean streets of Detroit. In the process, he’s stripped away the comforting sense shared by so many Americans that the struggle for racial justice is complete, the victory won. If ever a book deserved to be essential reading, this is it."
- Kevin Boyle, author of the National Book Award-winning Arc of Justice: A Saga of Race, Civil Rights and Murder in the Jazz Age

"Thomas Sugrue's, Sweet Land of Liberty is one of the most important works on modern American history to appear in recent memory. It challenges and transforms what we think, not only about the struggle for civil rights, but more broadly about the entire course of American social and political development. It is one of those books that truly changes our historical perspective."
- Steve Hahn, author of the Pulitzer-Prize winning, A Nation Under Our Feet: Black Political Struggles in the Rural South from Slavery to the Great Migration.

"Richly researched, elegantly written, and monumental in scope, Sweet Land of Liberty offers a riveting portrait of racial change in the most putatively free and equal part of the United States. In shifting attention to northern streets and confrontations, this painful yet stirring narrative eloquently enlarges the scope of American history, compellingly extends our understanding of social movements, and thoughtfully reminds us that deep and just change does not come easily."
- Ira Katznelson, Ruggles Professor of Political Science and History, Columbia University.

Thomas J. Sugrue is a historian at the University of Pennsylvania, where he is currently Edmund J. and Louise W. Kahn Professor of History and Sociology. Sugrue's first book, "The Origins of the Urban Crisis," won the prestigious Bancroft Prize in American History, the President's Book Award of the Social Science History Association, the Philip Taft Prize in Labor History, and the Urban History Association Prize for Best Book in North American Urban History. He has also published essays and reviews in "The Washington Post, The Nation, London Review of Books, Chicago Tribune, The Philadelphia Inquirer," and "Detroit Free Press. "
Loading...
or
Not Currently Available for Direct Purchase