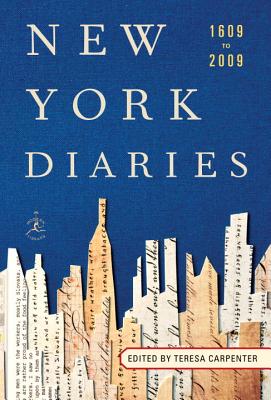 New York is a city like no other. Through the centuries, she’s been embraced and reviled, worshipped and feared, praised and battered—all the while standing at the crossroads of American politics, business, society, and culture. Pulitzer Prize winner and New York Times bestselling author Teresa Carpenter, a lifelong diary enthusiast, scoured the archives of libraries, historical societies, and private estates to assemble here an almost holographic view of this iconic metropolis. Starting on January 1 and traveling day by day through the year, these journal entries are selected from four centuries of writing—from the early 1600s to the present—allowing New York natives and visitors, writers and artists, thinkers and bloggers, to reach across time and share vivid and compelling snapshots of life in the Capital of the World.

“Today I arrived by train in New York City, which I’d never seen before, walked through the grandeur of Grand Central Terminal, stepped outside, got my first look at the city and instantly fell in love with it. Silently, inside myself, I yelled: I should have been born here!”—Edward Robb Ellis, May 22, 1947

“My experience is that a man cannot go anywhere in New York in an hour. The distances are too great—you must have another day to it. If you have got six things to do, you have got to take six days to do them in.”—Mark Twain, February 2, 1867

“A Peregrine falcon just flew past my window.”—Johnny/Quipu Blogspot, February 5, 2003

“At ten we have Orders to march up the River for Mount-Washington. Adieu, New-York; perhaps forever!”—Philip Vickers Fithian, September 3, 1776


New York Diaries reveals intimate, whimsical, profound, sobering, and indelible reflections on such historical moments as President Washington’s first State of the Union address, the death of Abraham Lincoln, the sinking of the Titanic, the end of World War II—even the first incursion of Europeans into the city’s Upper Bay on September 11, 1609, a presage to our country’s greatest catastrophe nearly four hundred years later. Featuring familiar faces and fascinating unknowns, these pages provide a rich mosaic that is uniquely New York.

"The most convivial and unorthodox history of New York City one is likely to come across... There are so many fine moments in ‘New York Diaries: 1609-2009’ that it’s impossible to list them all.” --Dwight Garner, New York Times

"Hilarious as it is heartbreaking, New York Diaries is a must read for anyone who has fallen in love with the Big Apple."--Darren Richard Carlaw, The New York Journal of Books

“I think the most fun way to read New York Diaries would be to keep it by your bedside. . . the effect, oftentimes, is of a chorus of voices, separated by decades, even centuries, unconsciously echoing the same sentiments and complaints.” –Maureen Corrigan, NPR Books


"As comprehensive as it is revealing, making the city come alive in its glamour and grime."--Susannah Cahalan, New York Post

"One of the eminently readable, and easily approachable, tomes on Big Apple history, one that will enchant and satisfy with its depth of detail and breadth of range."--DigitalJournal.com

"[A] remarkable feat of an anthology."--BrainPickings.com

Teresa Carpenter is the author of four books, including the "New York Times" bestseller "Missing Beauty." She is a former senior editor of "The Village Voice, " where her feature articles on crime and the law won a Pulitzer Prize in 1981. She lives in New York City's Greenwich Village with her husband, writer Steven Levy, and their son.