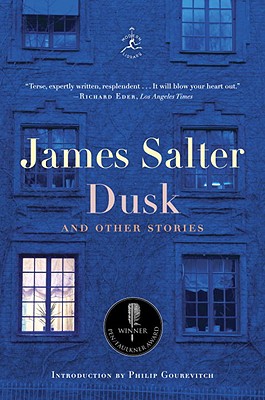 Dusk and Other Stories

James Salter is an author with an impassioned following among contemporary readers, writers, and critics, and Dusk and Other Stories is among his signal achievements. First published nearly a quarter-century ago, and one of the very few short-story collections to win the PEN/Faulkner Award, this is American fiction at its most vital—each narrative a masterpiece of sustained power and seemingly effortless literary grace.

These stories chart the myriad moments and details that, taken together, shape a fate. Two New York attorneys newly flush with wealth embark on a dissolute tour of Italy. A divorced woman learns that she is about to lose the last thing of real value to her. An ambitious young screenwriter unexpectedly discovers the true meaning of art and glory. A rider, far off in the fields, is involved in an horrific accident—night is falling, and she must face her destiny alone.
Each of these stories is told with weighted calm, with a lingering mixture of precision and sudden revelation. They confirm James Salter as one of the finest writers of our time.


Praise For Dusk and Other Stories…

“[James Salter] can suggest in a single sentence, an individual’s entire history, the complex interplay of longing and fear, hope and need, that has brought about the present. In doing so, these stories glimmer with the magic of fiction; they pull us, hungrily, into the mundane drama of their characters’ lives.”—New York Times

“There is scarcely a writer alive who could not learn from his passion and precision of language.”—Peter Mathiessen

“Admirers of James Salter’s fiction speak of it reverently, with delicacy, almost in awe, expressions of enthusiasm befitting the work.”—Elizabeth Benedict

James Salter is the author of the novels "Solo Faces, Light Years, A Sport and a Pastime, The Arm of Flesh "(revised as "Cassada")," "and "The Hunters;" the memoirs "Gods of Tin "and "Burning the Days;" and the collection, "Dusk and Other Stories" which won the 1989 PEN/Faulkner Award. He lives in Colorado and on Long Island.

Philip Gourevitch is the author of "We Wish to Inform You that Tomorrow We Will Be Killed with Our Families, A Cold Case, " and "The Ballad of Abu Ghraib." He has served as editor of "The Paris Review" and is a longtime staff writer for "The New Yorker."
Loading...
or
Not Currently Available for Direct Purchase