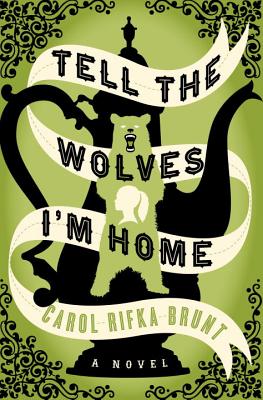 NAMED ONE OF THE BEST BOOKS OF THE YEAR BY
The Wall Street Journal • O: The Oprah Magazine • BookPage • Kirkus Reviews • Booklist • School Library Journal

In this striking literary debut, Carol Rifka Brunt unfolds a moving story of love, grief, and renewal as two lonely people become the unlikeliest of friends and find that sometimes you don’t know you’ve lost someone until you’ve found them.

1987. There’s only one person who has ever truly understood fourteen-year-old June Elbus, and that’s her uncle, the renowned painter Finn Weiss. Shy at school and distant from her older sister, June can only be herself in Finn’s company; he is her godfather, confidant, and best friend. So when he dies, far too young, of a mysterious illness her mother can barely speak about, June’s world is turned upside down. But Finn’s death brings a surprise acquaintance into June’s life—someone who will help her to heal, and to question what she thinks she knows about Finn, her family, and even her own heart.

At Finn’s funeral, June notices a strange man lingering just beyond the crowd. A few days later, she receives a package in the mail. Inside is a beautiful teapot she recognizes from Finn’s apartment, and a note from Toby, the stranger, asking for an opportunity to meet. As the two begin to spend time together, June realizes she’s not the only one who misses Finn, and if she can bring herself to trust this unexpected friend, he just might be the one she needs the most.

An emotionally charged coming-of-age novel, Tell the Wolves I’m Home is a tender story of love lost and found, an unforgettable portrait of the way compassion can make us whole again.

“This compassionate and vital novel will rivet readers until the very end. . . . The narrative is as tender and raw as an exposed nerve, pulsing with the sharpest agonies and ecstasies of the human condition.”—BookPage

“Transcendent . . . Peopled by characters who will live in readers’ imaginations long after the final page is turned, Brunt’s novel is a beautifully bittersweet mixture of heartbreak and hope.”—Booklist (starred review)

“Carol Rifka Brunt establishes herself as an emerging author to watch.”—Minneapolis Star Tribune

Tell the Wolves I'm Home was named one of the Wall Street Journal's Top 10 Novels of 2012, one of Oprah.com's Best Books of 2012, one of Kirkus Reviews' top 100 books of the year, and one of Booklist's Top 10 First Novels of 2012 as well as a 2012 O Magazine Favorite Read.  It is also a Goodreads Choice Awards Finalist for Fiction and a Shelf Awareness Reviewer's Choice pick for 2012.

“Tremendously moving…Brunt strikes a difficult balance, imbuing June with the disarming candor of a child and the melancholy wisdom of a heart-scarred adult."—The Wall Street Journal

“In this lovely debut novel set in the 1980s, Carol Rifka Brunt takes us under the skin and inside the tumultuous heart of June Elbus…Distracted parents, tussling adolescents, the awful ghost-world of the AIDS-afflicted before AZT—all of it springs to life in Brunt’s touching and ultimately hopeful book.”--People

“[A] transcendent debut… Peopled by characters who will live in readers’ imaginations long after the final page is turned, Brunt’s novel is a beautifully bittersweet mix of heartbreak and hope.”—Booklist (starred review)

“Carol Rifka Brunt’s astonishing first novel is so good, there’s no need to grade on a curve: Tell the Wolves I'm Home is not only one of the best debuts of 2012, it’s one of the best books of the year, plain and simple.  In a literary landscape overflowing with coming-of-age stories, Tell the Wolves I'm Home rises above the rest. The narrative is as tender and raw as an exposed nerve, pulsing with the sharpest agonies and ecstasies of the human condition.”—Bookpage

“A poignant debut…Brunt's first novel elegantly pictures the New York art world of the 1980s, suburban Westchester and the isolation of AIDS.”--Kirkus

“In [Tell the Wolves I’m Home], 15-year-old June must come to terms with the death of her beloved uncle Finn, an artist, from AIDS in 1980s New York. …What begins as a wary relationship between former rivals for Finn’s affection blossoms touchingly.”-PW

“[This] gut-wrenching portrayal of a 13-year-old coping with her beloved Uncle Finn’s death from AIDS more than delivers.”—Daily Candy

“[A] striking first outing…Brunt weaves a terrific coming-of-age story, painting a vibrant picture of June’s dreams and insecurities as she teeters on the border between childhood and maturity.”—The Onion A.V. Club

“An uplifting debut novel about loss, love, and unlikely friendships in the midst of the 1980s AIDS epidemic …a literary pleasure read.”—BookBrowse

“With this debut novel that flawlessly encapsulates the fragile years during the mid-'80s when the specter of AIDS began to haunt society at large, Carol Rifka Brunt establishes herself as an emerging author to watch…TELL THE WOLVES I'M HOME will undoubtedly be this summer's literary sleeper hit.” – Minneapolis Star Tribune

“Brunt's debut novel is both a painful reminder of the ill-informed responses to a once little-known disease and a delightful romp through an earlier decade. The relationship issues with parents and siblings should appeal to YA audiences, but adult readers will enjoy the suspenseful plot and quirky characters”—Library Journal

“A fresh yet nostalgic debut novel about a 1980s teen who loses a beloved uncle to AIDS but finds herself by befriending his grieving boyfriend. Filled with lost opportunities and second chances, Tell the Wolves I'm Home delivers wisdom, innocence and originality with surprising sweetness. Its cast of waifs and strays will steal your heart as they show each other the way to redemption.” –Shelf Awareness

“A gorgeously evocative novel about love, loss, and the ragged mysteries of the human heart, all filtered through the achingly real voice of a remarkable young heroine. How can you not fall in love with a book that shows you how hope can make a difference?”—Caroline Leavitt,  New York Times bestselling author of Pictures of You

“Tell the Wolves I’m Home is a tale as charming and magnetic as the missing character at its heart. It’s a love story of the most unusual kind—several love stories, really—vivid and madly relatable, heartening as well as heartbreaking. Brunt is a captivating storyteller and a wonderful new voice.”—Rebecca Makkai, author of The Borrower

“Not since To Kill A Mockingbird have I read a piece of fiction that so beautifully captures the point of view of a young person, especially one so inspiringly unable to accept the prejudices of others….at turns getting away- with-it exhilarating and pass-the-tissues heartbreaking — but also a testament to the power of secrets kept and revealed.”—Metrosource

Carol Rifka Brunt's work has appeared in several literary journals, includin"g North American Review" and "The Sun." In 2006, she was one of three fiction writers who received the New Writing Ventures award and, in 2007, she received a generous Arts Council grant to write "Tell the Wolves I'm Home, " her first novel. Originally from New York, she currently lives in England with her husband and three children.
Loading...
or
Not Currently Available for Direct Purchase