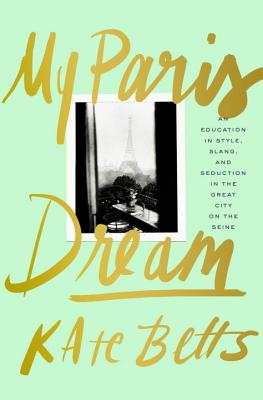 An Education in Style, Slang, and Seduction in the Great City on the Seine

A charming and insightful memoir about coming of age as a fashion journalist in 1980s Paris, by former "Vogue" and "Harper's Bazaar" editor Kate Betts, the author of "Everyday Icon: Michelle Obama and the Power of Style"
"
You can always come back, my mother said. Just go. "
As a young woman, Kate Betts nursed a dream of striking out on her own in a faraway place and becoming a glamorous foreign correspondent. After college and not without trepidation she took off for Paris, renting a room in the apartment of a young BCBG ("bon chic, bon genre") family and throwing herself into the local culture. She was determined to master French slang, style, and savoir faire, and to find a job that would give her a reason to stay.
After a series of dues-paying jobs that seemed only to reinforce her outsider status, Kate's hard work and willingness to take on any assignment paid off: Her writing and intrepid forays into "la France Profonde" true France caught the eye of John Fairchild, the mercurial fashion arbiter and publisher of "Women's Wear Daily, " the industry's bible. Kate's earliest assignments investigating the mineral water preferred by high society, chasing after a costumed band of wild boar hunters through the forests of Brittany were a rough apprenticeship, but she was rewarded for her efforts and was initiated into the elite ranks of Mr. Fairchild's trusted few who sat beside him in the front row and at private previews in the ateliers of the gods of French fashion. From a woozy yet mesmerizing Yves Saint Laurent and the mischievous and commanding Karl Lagerfeld to the riotous, brilliant young guns who were rewriting all the rules Martin Margiela, Helmut Lang, John Galliano Betts gives us a view of what it was like to be an American girl, learning about herself, falling in love, and finding her tribe.
Kate Betts's captivating memoir brings to life the enchantment of France from the nightclubs of 1980s Paris where she learned to dance Le Rock, to the lavender fields of Provence and the grand spectacle of the Cour Carree and magically re-creates that moment in life when a young woman discovers who she's meant to be.
Praise for "My Paris Dream"
A] glittering coming-of-age tale. "Entertainment Weekly" (The Must List)
Fashion and self-examination froth and wisdom might seem like odd bookfellows, but Betts brings them together with winning confidence. "The New York Times Book Review"
As light and refreshing as an ice cream cone from the legendary Berthillon, "My Paris Dream" evokes the sights, sounds, smells and styles of 1980s Paris. " USA Today"
"My" "Paris Dream "is awesome. " Man Repeller"
What was Bett's Paris dream? Her dream was her awakening, which] is elegantly chronicled in these pages. " The Daily Beast"
For those who are interested in the men and women involved in haute couture, Betts reminiscences will be a delight. "Kirkus Reviews"
Full of slangy French, delectable food and swoon-worthy fashion. "BookPage"
An amazing story of a young woman in Paris trying to break into the fashion business. Sophia Amoruso, author of "#GIRLBOSS"
Kate Betts's story brought me back to my own young self and the journey I made in my case, from a small town in Illinois to New York City. Cindy Crawford.

Kate Betts has been covering the world of style for twenty-five years, first as a reporter in the Paris bureau of "Women s Wear Daily" and later as an editor at "Vogue, " "Harper s Bazaar, " and "Time" magazine. The youngest person ever to serve as editor in chief of "Harper s Bazaar, " she is also the author of the critically acclaimed book "Everyday Icon: Michelle Obama and the Power of Style." Betts lives in New York City with her husband, the writer Chip Brown, and their two children."
Loading...
or
Not Currently Available for Direct Purchase