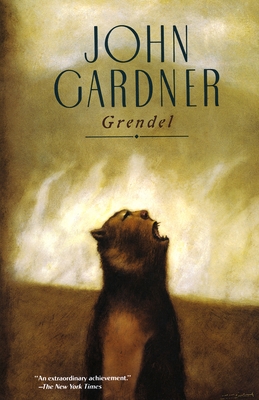 This classic and much lauded retelling of Beowulf follows the monster Grendel as he learns about humans and fights the war at the center of the Anglo Saxon classic epic.

The first and most terrifying monster in English literature, from the great early epic Beowulf, tells his own side of the story in this frequently banned book. This is the novel William Gass called "one of the finest of our contemporary fictions."

JOHN GARDNER received wide acclaim for his novels, his collections of short stories and his critical works.  He was born in Batavia, New York in 1933 and taught English, Anglo-Saxon and creative writing in Oberlin, Chico State College, San Francisco State, Southern Illinois, Bennington and SUNY-Binghamton. His books include The Art of Fiction, The Art of Living, Grendel, Jason, and Media, The Life and Times of Chaucer, Mickelsson's Ghosts, Nickel Mountain, October Light, The resurrection, The Sunlight Dialogues, Stillness and Shadows, and various books for children. He died in a motorcycle accident in 1982.
Loading...
or support indie stores by buying on