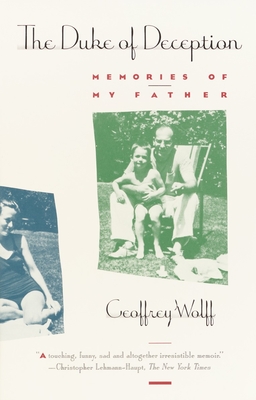 The Duke of Deception

Memories of My Father

Duke Wolff was a flawless specimen of the American clubman -- a product of Yale and the OSS, a one-time fighter pilot turned aviation engineer. Duke Wolff was a failure who flunked out of a series of undistinguished schools, was passed up for military service, and supported himself with desperately improvised scams, exploiting employers, wives, and, finally, his own son.

In The Duke of Deception, Geoffrey Wolff unravels the enigma of this Gatsbyesque figure, a bad man who somehow was also a very good father, an inveterate liar who falsified everything but love.

Praise For The Duke of Deception: Memories of My Father…

Abundant with the complexities and contradictions of family sympathy...First-rate autobiography, conscientious and intimate....It is as lucid and complicated...as a good novel."

"An enormously moving story of familial love and hate and coming-of-age...No man can finish this book without resolving to take stock of his relationship with his own father....The claim on the reader is very large indeed."

"Beautifully written...rich in anecdote...resonant with conflicting emotions, from adoration to anger, from gratitude to guilt, from pride to pity."

An acclaimed novelist, essayist, biographer, and critic, Geoffrey Wolff is a prominent voice in contemporary American literature. Educated at Cambridge and at Princeton, from which he graduated summa cum laude, he is Professor Emeritus of English and Comparative Literature at the University of California, Irvine, where he was the Director of the Graduate Fiction Program from 1995 to 2006. Previously, he served on the faculties of Istanbul University and Princeton University and has been a book editor at the Washington Post and Newsweek. He is the author of six novels, including The Age of Consent (Knopf, 1995), set in a close-knit utopian community in upstate New York, and The Final Club (Knopf, 1990), about secretive social networks at Princeton. His nonfiction books include Black Sun (Random House, 1976), on the short-lived avant-garde poet Harry Crosby; The Art of Burning Bridges: A Life of John O’Hara (Knopf, 2003), a literary biography of the American fiction writer; The Duke of Deception (Random House, 1979), a memoir that was a runner-up for the Pulitzer Prize; The Edge of Maine (National Geographic, 2005), a rich portrayal of the salty, sea-pounded, and seasonally gentrified Maine coast; and The Hard Way Around: The Passages of Joshua Slocum (Knopf 2010), a biography of the legendary icon of adventure. He received the Award in Literature from the American Academy of Arts and Letters in 1994 and his honors also include fellowships from the Guggenheim Foundation and the National Endowment for the Arts. During 2007, he was a Fellow of the American Academy in Berlin. He lives in Bath, Maine with his family.
Loading...
or support indie stores by buying on
(This book is on backorder)