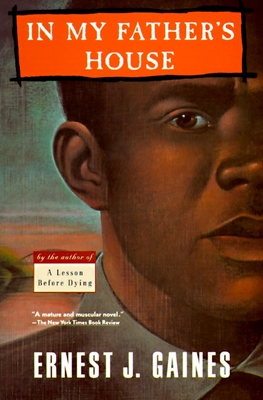 A compelling novel of a man brought to reckon with his buried past...

In St. Adrienne, a small black community in Louisiana, Reverend Phillip Martin—a respected minister and civil rights leader—comes face to face with the sins of his youth in the person of Robert X, a young, unkempt stranger who arrives in town for a mysterious "meeting" with the Reverend.

In the confrontation between the two, the young man's secret burden explodes into the open, and Phillip Martin begins a long-neglected journey into his youth to discover how destructive his former life was, for himself and for those around him.

“…on every page there's an authentic moment, or a dead-right knot of conversation, or a truer-than-true turn of phrase…”—Kirkus Reviews

Ernest Gaines was born on a plantation in Pointe Coupée Parish near New Roads, Louisiana, which is the Bayonne of all his fictional works. He is writer-in-residence emeritus at the University of Louisiana at Lafayette. In 1993 Gaines received the John D. and Catherine T. MacArthur Foundation Fellowship for his lifetime achievements. In 1996 he was named a Chevalier de l’Ordre des Arts et des Lettres, one of France’s highest decorations. He and his wife, Dianne, live in Oscar, Louisiana.

Praise For In My Father's House (Vintage Contemporaries)…

“It is the force of Mr. Gaines's character and intelligence, operating through [his] deceptively quiet style, that makes his fiction compelling. . . . The dialogue is spare, but unerring, and humor will keep slipping in subtly despite the tragedies behind these lives.” —Larry McMurty, The New York Times Book Review

“He write's eloquently of the frustrated love between fathers and sons. . . . His best writing is marked by what Ralph Ellison, describing the blues, call ‘near-tragic, near-comic lyricism.’” —Margo Jefferson, Newsweek

“The dialogue is mesmerizing. . . . The characterizations come right off the page. . . . No one writes about mainstream, ordinary black life as well as he does.” —Ishmael Reed

“It would make a gripping play with its tight plot and strong scenes of confrontation, its Ibsenite central character.” —The Washington Post
or support indie stores by buying on
Copyright © 2020 American Booksellers Association