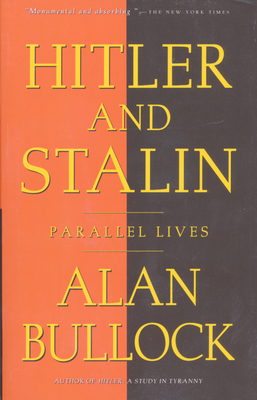 Forty years after his Hitler: A Study in Tyranny set a standard for scholarship of the Nazi era, Lord Alan Bullock gives readers a breathtakingly accomplished dual biography that places Adolf Hitler's origins, personality, career, and legacy alongside those of Joseph Stalin--his implacable antagonist and moral mirror image.

Alan Bullock was knighted in 1972, becoming Sir Alan Bullock and in 1976 was made a life peer as Baron Bullock, of Leafield in the County of Oxfordshire. Born in 1914, he studied at Oxford University and served as a research assistant to Winston Churchill while the prime minister was writing his A History of the English-Speaking Peoples. Bullock was a history fellow at New College, Oxford and helped found St Catherine's College, Oxford. He is best known for his book Hitler: A Study in Tyranny (1952) which was the first comprehensive biography of Adolf Hitler and influenced many other major biographies of Hitler. Bullock died in 2004.

" A monumental and completely absorbing volume that creates vivid portraits of...two tyrants, while illuminating the first half of this blood-stained century."-- The New York Times
or
Not Currently Available for Direct Purchase
Copyright © 2020 American Booksellers Association