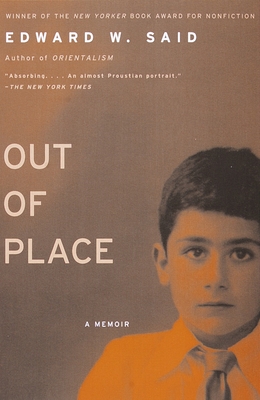 From one of the most important intellectuals of our time comes an extraordinary story of exile and a celebration of an irrecoverable past. A fatal medical diagnosis in 1991 convinced Edward Said that he should leave a record of where he was born and spent his childhood, and so with this memoir he rediscovers the lost Arab world of his early years in Palestine, Lebanon, and Egypt.

Said writes with great passion and wit about his family and his friends from his birthplace in Jerusalem, schools in Cairo, and summers in the mountains above Beirut, to boarding school and college in the United States, revealing an unimaginable world of rich, colorful characters and exotic eastern landscapes. Underscoring all is the confusion of identity the young Said experienced as he came to terms with the dissonance of being an American citizen, a Christian and a Palestinian, and, ultimately, an outsider. Richly detailed, moving, often profound, Out of Place depicts a young man's coming of age and the genesis of a great modern thinker.

Praise For Out of Place: A Memoir…

"Said has turned the writing of a memoir itself into perhaps the most profound type of homecoming a perennial exile can know." --The Village Voice Literary Supplement

"Engrossing. . . . [Said has] an almost Proustian feel for smells, sounds, sights, and telling anecdotes." --The New York Review of Books

"If autobiography is above all a means of explaining one's self to oneself, then Out of Place . . . must be seen as a triumph." --The Boston Globe

Edward W. Said was born in 1935 in Jerusalem, raised in Jerusalem and Cairo, and educated in the United States, where he attended Princeton (B.A. 1957) and Harvard (M.A. 1960; Ph.D. 1964). In 1963, he began teaching at Columbia University, where he was University Professor of English and Comparative Literature. He died in 2003 in New York City.

He is the author of twenty-two books which have been translated into 35 languages, including Orientalism (1978); The Question of Palestine (1979); Covering Islam (1980); The World, the Text, and the Critic (1983); Culture and Imperialism (1993); Peace and Its Discontents: Essays on Palestine and the Middle East Peace Process (1996); and Out of Place: A Memoir (1999). Besides his academic work, he wrote a twice-monthly column for Al-Hayat and Al-Ahram; was a regular contributor to newspapers in Europe, Asia, and the Middle East; and was the music critic for The Nation.