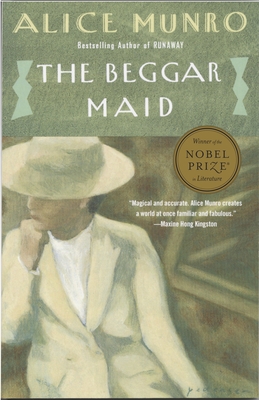 In this series of interweaving stories, Munro recreates the evolving bond between two women in the course of almost forty years. One is Flo, practical, suspicious of other people's airs, at times dismayingly vulgar. the other is Rose, Flo's stepdaughter, a clumsy, shy girl who somehow leaves the small town she grew up in to achieve her own equivocal success in the larger world.

Praise For The Beggar Maid: Stories of Flo and Rose (Vintage International)…

"Whether Alice Munro's The Beggar Maid is a collection of stories or a new kind of novel I'm not quite sure, but whatever it is, it's wonderful. The psychological precision...is a delight, and the startling twists -- the unexpected leaps in time, the transformation of familiar characters -- they make the book what books ought to be, a little wild, a little mysterious." -- John Gardner

In this exhilarating series of interweaving stories, Alice Munro re-creates the evolving bond -- one that is both constricting and empowering -- between two women in the coupe of almost forty years. One is Flo, practical, suspicious of other people's airs, at times dismayingly vulgar. The other is Rose, Flo's stepdaughter, a clumsy, shy girl who somehow-in spite of Flo's ridicule and ghastly warnings -- leaves the small town she grew up in to achieve her own equivocal success in the larger world.

"The stories are absolutely wonderful-every word she writes is interesting." -- Alice Adams

"The best stories of the year." -- The Nation