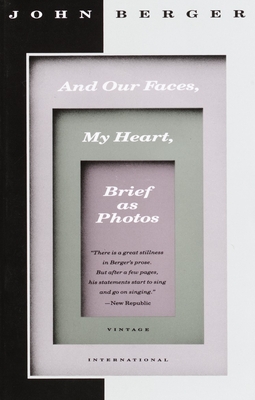 And Our Faces, My Heart, Brief as Photos (Vintage International)

Booker Prize-winning author John Berger reveals the ties between love and absence, the ways poetry endows language with the assurance of prayer, and the tensions between the forward movement of sexuality and the steady backward tug of time. He recreates the mysterious forces at work in a Rembrandt painting, transcribes the sensorial experience of viewing lilacs at dusk, and explores the meaning of home to early man and to the hundreds of thousands of displaced people in our cities today. And Our Faces, My Heart, Brief as Photos is a seamless fusion of the political and personal.

John Berger was born in London in 1926. He is well known for his novels and stories as well as for his works of nonfiction, including several volumes of art criticism. His first novel, A Painter of Our Time, was published in 1958, and since then his books have included Ways of Seeing, the fiction trilogy Into Their Labours, and the novel G., which won the Booker Prize in 1972. In 1962 he left Britain permanently, and lived in a small village in the French Alps. He died in 2017.
Loading...
or support indie stores by buying on