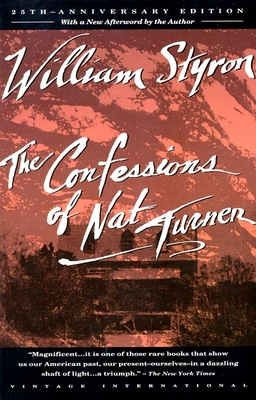 In the late summer of 1831, in a remote section of southeastern Virginia, there took place the only effective, sustained revolt in the annals of American Negro slavery...

The revolt was led by a remarkable Negro preacher named Nat Turner, an educated slave who felt himself divinely ordained to annihilate all the white people in the region.

The Confessions of Nat Turner is narrated by Nat himself as he lingers in jail through the cold autumnal days before his execution. The compelling story ranges over the whole of Nat's Life, reaching its inevitable and shattering climax that bloody day in August.

The Confessions of Nat Turner is not only a masterpiece of storytelling; is also reveals in unforgettable human terms the agonizing essence of Negro slavery. Through the mind of a slave, Willie Styron has re-created a catastrophic event, and dramatized the intermingled miseries, frustrations--and hopes--which caused this extraordinary black man to rise up out of the early mists of our history and strike down those who held his people in bondage.