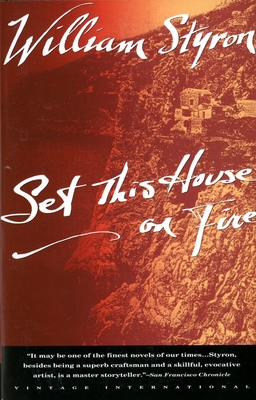 The day after Peter Leverett met his old friend Mason Flagg in Italy, Mason was found dead. The hours leading up to his death were a nightmare for Peter—both in their violence and in their maddening unreality. The blaze of events which followed was, Peter soon realized, ignited by a conflict between two men: Mason Flagg himself, and Cass Kinsolving, a tortured, self-destructive painter, a natural enemy and prey to the monstrous evil of Mason Flagg. Three events—murder, rape and suicide—explode in the is relentless and passionate novel, almost overwhelming in its conception of the varieties of good and evil.

“It may be one of the finest novels of our times . . . Styron, besides being a superb craftsman and a skillful, evocative artist, is a master storyteller.”—San Francisco Chronicle

Praise For Set This House on Fire (Vintage International)…

Immediately impressive...the sense of the striking scene...the fine ear for dialogue, the sharp observation of cities and scenery and interiors."

Three Americans converge in an Italian village shortly after World War II. One is a naive Southern lawyer. One is a rough-edged artist with a fatal penchant for alcohol. And one is a charming and priapic aristocrat who may be the closest thing possible to pure wickedness in an age that has banished the devil along with God. Out of their collective alchemy William Styron has crafted an electrifying and deeply unsettling novel of rape, murder, and suicide -- a work with a Dostoevskian insight into the dreadful persuasiveness of evil.

William Styron (1925-2006), a native of the Virginia Tidewater, was a graduate of Duke University and a veteran of the U.S. Marine Corps. His books include Lie Down in Darkness, The Long March, Set This House on Fire, The Confessions of Nat Turner, Sophie’s Choice, This Quiet Dust, Darkness Visible, and A Tidewater Morning. He was awarded the Pulitzer Prize for Fiction, the Howells Medal, the American Book Award, the Légion d’Honneur, and the Witness to Justice Award from the Auschwitz Jewish Center Foundation. With his wife, the poet and activist Rose Styron, he lived for most of his adult life in Roxbury, Connecticut, and in Vineyard Haven, Massachusetts, where he is buried.
Loading...
or
Not Currently Available for Direct Purchase