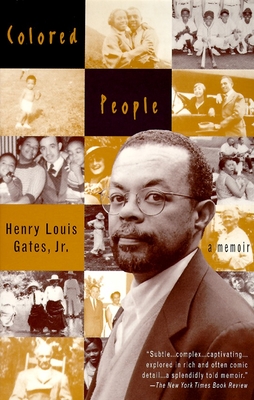 In a coming-of-age story as enchantingly vivid and ribald as anything Mark Twain or Zora Neale Hurston, Henry Louis Gates, Jr., recounts his childhood in the mill town of Piedmont, West Virginia, in the 1950s and 1960s and ushers readers into a gossip, of lye-and-mashed-potato “processes,” and of slyly stubborn resistance to the indignities of segregation.

A winner of the Chicago Tribune’s Heartland Award and the Lillian Smith Prize, Colored People is a pungent and poignant masterpiece of recollection, a work that extends and deepens our sense of African American history even as it entrances us with its bravura storytelling

Henry Louis Gates, Jr., is the Alphonse Fletcher University Professor and the Director of the W. E. B. Du Bois Institute for African and African American Research at Harvard University. The author of numerous books, including the widely acclaimed memoir Colored People, Professor Gates has also edited several anthologies and is coeditor with Kwame Anthony Appiah of Encarta Africana, an encyclopedia of the African Diaspora. An influential cultural critic, he is a frequent contributor to The New Yorker and other publications and is the recipient of many honors, including a MacArthur Foundation Fellowship and the National Humanities Medal.

Praise For Colored People: A Memoir…

"Affecting, beautifully written and morally complex...The heart of the memoir is Gates' portrait of his family, and its placement in a black society whose strength, richness and self-confidence thrived in the darkness of segregation."--Richard Eder, The Los Angeles Times