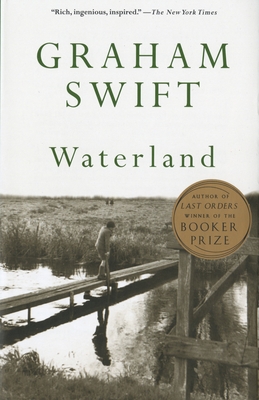 Set in the bleak Fen Country of East Anglia, and spanning some 240 years in the lives of its haunted narrator and his ancestors, Waterland is a book that takes in eels and incest, ale-making and madness, the heartless sweep of history and a family romance as tormented as any in Greek tragedy.

"Waterland, like the Hardy novels, carries with all else a profound knowledge of a people, a place, and their interweaving.... Swift tells his tale with wonderful contemporary verve and verbal felicity.... A fine and original work."--Los Angeles Times

"Swift spins a tale of empire-building, land reclamation, brewers and sluice-minders, bewhiskered Victorian patriarchs, insane and visionary relicts.... I can't remember when I read a book of such strange, insidious, unsettling power with a more startling cast of characters." -- Books and Bookmen (U.K.)

"A formidably intelligent book -- animated by an impressive, angry pity at what human creatures are capable of doing to one another in the name of love and need.... The most powerful novel I have read for some time." -- The New York Review of Books

"Waterland appropriates the Fens as Moby Dick did whaling or Wuthering Heights the moors -- a beautiful, serious, and intelligent novel, admirably ambitious and original." -- The Observer (U.K.)

Graham Swift is the author of six novels, including the Booker Prize-winning Last Orders. His work has been translated into more than twenty languages. He lives in London, England.
Loading...
or
Not Currently Available for Direct Purchase