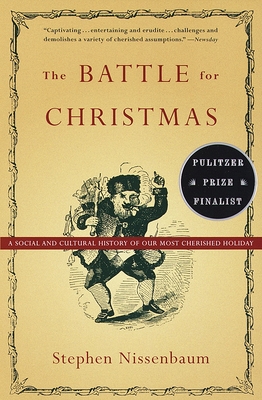 The Battle for Christmas

A Cultural History of America's Most Cherished Holiday

PULITZER PRIZE FINALIST • Drawing on a wealth of research, this "fascinating" book (The New York Times Book Review) charts the invention of our current Yuletide traditions, from St. Nicholas to the Christmas tree and, perhaps most radically, the practice of giving gifts to children.

Anyone who laments the excesses of Christmas might consider the Puritans of colonial Massachusetts: they simply outlawed the holiday. The Puritans had their reasons, since Christmas was once an occasion for drunkenness and riot, when poor "wassailers  extorted food and drink from the well-to-do. In this intriguing and innovative work of social history, Stephen Nissenbaum rediscovers Christmas's carnival origins and shows how it was transformed, during the nineteenth century, into a festival of domesticity and consumerism.

Bursting with detail, filled with subversive readings of such seasonal classics as "A Visit from St. Nicholas” and A Christmas Carol, The Battle for Christmas captures the glorious strangeness of the past even as it helps us better understand our present.

Praise For The Battle for Christmas: A Cultural History of America's Most Cherished Holiday…

"Captivating...entertaining and erudite...challenges and demolishes a variety of cherished assumptions." —Newsday

"Christmas...too often fails to wholly satisfy the spirit or the senses. How and why the yuletide came to this is the subject of historian Stephen Nissenbaum's fascinating new study. " —Newsweek

STEPHEN NISSENBAUM received his A.B. from Harvard College in 1961, his M.A. from Columbia University in 1963, and his Ph.D. from the University of Wisconsin in 1968. He has taught at the University of Massachusetts, Amherst since 1968, and is currently professor of history there.  He has been the recipient of fellowships from the National Endowment for the Humanities, the American Council of Learned Societies, the American Antiquarian Society, the Massachusetts Historical Society, and the Charles Warren Center at Harvard. In addition, he was James P. Harrison Professor of History at the College of William and Mary, 1989-90. Active in the public humanities, he has served as member and president of the Massachusetts Foundation for the Humanities, and as historical advisor for several film productions.  The Battle for Christmas was a Pulitzer Prize finalist in History in 1997.
Loading...
or
Not Currently Available for Direct Purchase