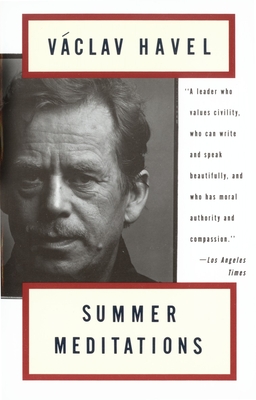 In a book written while he was president of Czechoslovakia, Vaclav Havel combines the same powerful eloquence, moral passion, and abiding wisdom that informed his writing as a dissident and playwright, with a candor unprecedented from one with the broad perspective and infinite responsibility of governing a country.

Havel, now president of the Czech Republic, addresses the legacy of Communism as the euphoria of the Velvet Revolution gives way to a more problematic reality. Yet even as he grapples with the challenges of political change, he affirms his belief in a politics motivated by moral responsibility; in an economy tempered by compassion; and in the central roles of art and culture in the transformation of society. Summer Meditations is not only a timely and necessary testament of events in Eastern Europe but a profound reflection upon the nature and practice of politics and a stirring call for morality, civility, and openness in public life throughout the world.

"It is surely for the president of a modern country, while still in office, to offer the public so unsparing an expose of his political and personal philosophy. And what is even more striking still is the elevated quality, morally and intellectually, of the philosophy that emerges from this effort."

"An eloquent reminder that moral struggles do not end with the overthrow of dictators." -- Christian Science Monitor

Translated from the Czech by Paul Wilson

Václav Havel was born in Czechoslovakia in 1936. Among his plays, those best known in the West are The Garden Party, The Memorandum, Largo Desolato, Temptation, and three one-act plays, Audience, Private View, and Protest. He is a founding spokesman of Charter 77 and the author of many influential essays on the nature of totalitarianism and dissent. In 1979 he was sentenced to four and a half years in prison for his involvement in the human rights movement. Out of this imprisonment came his book of letters to his wife, Letters to Olga (1981). In 1989 he helped to found the Civic Forum, the first legal opposition movement in Czechoslovakia in 40 years; in December 1989 he was elected president of Czechoslovakia; and in 1994 became the first president of the independent Czech Republic. His memoir, To the Castle and Back, was published in 2007. He died in 2011 at the age of 75.
Loading...
or support indie stores by buying on