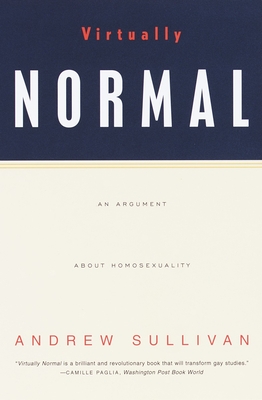 An Argument about Homosexuality

no subject has divided contemporary America more bitterly than homosexuality.  Addressing the full range of the debate in this pathbreaking book, Andrew Sullivan, the former editor of The New Republic, restores both reason and humanity to the discussion over how a predominantly heterosexual society should deal with its homosexual citizens.

Sympathetically yet relentlessly, Sullivan assesses the prevailing public positions on homosexuality--from prohibitionist to liberationist and from conservative to liberal.  In their place, he calls for a politics of homosexuality that would guarantee the rights of gays and lesbians without imposing tolerance.  At once deeply personal and impeccably reasoned, written with elegance and wit, Virtually Normal will challenge readers of every persuasion; no book is more likely to transform out sexual politics in the coming decades.

Andrew Sullivan was editor of The New Republic from 1991 to 1996.  He holds a B. A. in modern history and modern languages from Oxford University and a Ph. D. in political science from Harvard University.  He lives in Washington, D. C.
Loading...
or
Not Currently Available for Direct Purchase