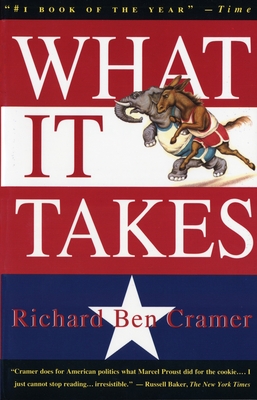 The Way to the White House

An American Iliad in the guise of contemporary political reportage, What It Takes penetrates the mystery at the heart of all presidential campaigns: How do presumably ordinary people acquire that mixture of ambition, stamina, and pure shamelessness that makes a true candidate? As he recounts the frenzied course of the 1988 presidential race -- and scours the psyches of contenders from George Bush and Robert Dole to Michael Dukakis and Gary Hart -- Pulitzer Prize-winning journalist Richard Ben Cramer comes up with the answers, in a book that is vast, exhaustively researched, exhilarating, and sometimes appalling in its revelations.

Praise For What It Takes: The Way to the White House…

"The ultimate insider's book on presidential politics...an unparalleled source book on the 1988 candidates."

Richard Ben Cramer's magazine articles have appeared in Rolling Stone and Esquire, and have been anthologized in Best American Essays. He is a recipient of the Puliter Prize for his work for the Philadelphia Inquirer. He died in 2013.