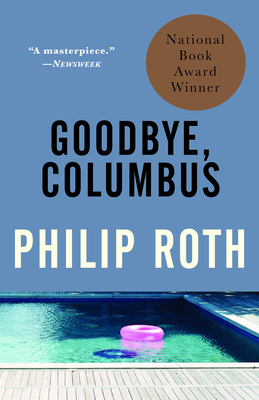 Other Editions of This Title:
Digital Audiobook, Spanish, Castilian (11/17/2021)

NATIONAL BOOK AWARD WINNER • From the Pulitzer Prize–winnning writer of explosive wit, merciless insight, and a fierce compassion comes "a masterpiece" (Newsweek) that illuminates the subterranean conflicts between parents and children and friends and neighbors in the American Jewish diaspora.

Roth's award-winning first book instantly established its author's reputation. Goodbye, Columbus is the story of Neil Klugman and pretty, spirited Brenda Patimkin, he of poor Newark, she of suburban Short Hills, who meet one summer break and dive into an affair that is as much about social class and suspicion as it is about love. The novella is accompanied by five short stories that range in tone from the iconoclastic to the astonishingly tender.

"Unlike those of us who come howling into the world, blind and bare, Mr. Roth appears with nails, hair, teeth, speaking coherently. He is skilled, witty, energetic and performs like a virtuoso." —Saul Bellow

PHILIP ROTH won the Pulitzer Prize for American Pastoral. In 1998 he received the National Medal of Arts at the White House and in 2002 the highest award of the American Academy of Arts and Letters, the Gold Medal in Fiction. He twice won the National Book Award and the National Book Critics Circle Award. He won the PEN/Faulkner Award three times. In 2005 The Plot Against America received the Society of American Historians’ Prize for “the outstanding historical novel on an American theme for 2003–2004.” Roth received PEN’s two most prestigious awards: in 2006 the PEN/Nabokov Award and in 2007 the PEN/Bellow Award for achievement in American fiction. In 2011 he received the National Humanities Medal at the White House, and was later named the fourth recipient of the Man Booker International Prize. He died in 2018.
Loading...
or support indie stores by buying on