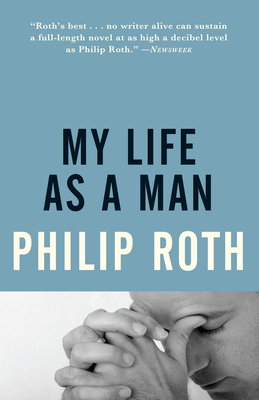 My Life as a Man (Vintage International)

A fiction-within-a-fiction, a labyrinthine edifice of funny, mournful, and harrowing meditations on the fatal impasse between a man and a woman, My Life as a Man is Roth's most blistering novel.

At its heart lies the marriage of Peter and Maureen Tarnopol, a gifted young writer and the woman who wants to be his muse but who instead is his nemesis. Their union is based on fraud and shored up by moral blackmail, but it is so perversely durable that, long after Maureen's death, Peter is still trying—and failing—to write his way free of it. Out of desperate inventions and cauterizing truths, acts of weakness, tenderheartedness, and shocking cruelty, Philip Roth creates a work worthy of Strindberg—a fierce tragedy of sexual need and blindness.

Praise For My Life as a Man (Vintage International)…

"Roth's best.... No writer alive can sustain a full-length novel at as high a decibel level as Philip Roth." —Newsweek

"[My Life as a Man is] a scalding, unique addition to the lasting literature about men and women." —Newsday

"A very grand work...in invention, in perception...in coming to grips with the wild inconsistencies of life and art." —New York