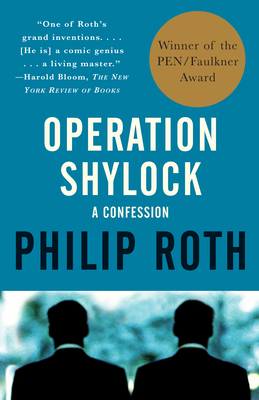 In this fiendishly imaginative book (which may or may not be fiction), Philip Roth meets a man who may or may not be Philip Roth. Because someone with that name has been touring Israel, promoting a bizarre reverse exodus of the Jews. Roth is intent on stopping him, even if that means impersonating his own impersonator.

With excruciating suspense, unfettered philosophical speculation, and a cast of characters that includes Israeli intelligence agents, Palestinian exiles, an accused war criminal, and an enticing charter member of an organization called Anti-Semites Anonymous, Operation Shylock barrels across the frontier between fact and fiction, seriousness and high comedy, history and nightmare.

"One of Roth's grand inventions.... [He is] a comic genius...a living master." —Harold Bloom, The New York Review of Books

"A devilish book, nervously exuding a kind of delirious brilliance like sweat at every pore, and madly comic." —Alfred Kazin

"A brilliant novel of ideas...Roth has gone farther into his own genius than he ever has before." —Ted Solotaroff, The Nation