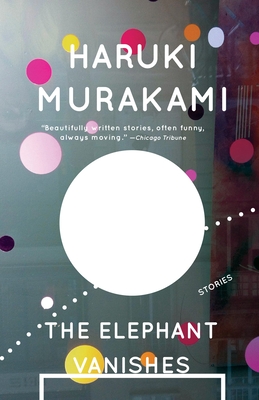 In the tales that make up The Elephant Vanishes, the imaginative genius that has made Haruki Murakami an international superstar is on full display.

In these stories, a man sees his favorite elephant vanish into thin air; a newlywed couple suffers attacks of hunger that drive them to hold up a McDonald’s in the middle of the night; and a young woman discovers that she has become irresistible to a little green monster who burrows up through her backyard. By turns haunting and hilarious, in The Elephant Vanishes Murakami crosses the border between separate realities—and comes back bearing remarkable treasures.

Includes the story "Barn Burning," which is the basis for the major motion picture Burning.

“Eerie, unsettling. . . . [A] wonderful combination of the bizarre and the mundane.” –Village Voice Literary Supplement

“Charming, humorous and frequently puzzling . . . The Elephant Vanishes [is] fun to read.” –The New York Times

“These stories show us Japan as it’s experienced from the inside. . . . [They] take place in parallel worlds not so much remote from ordinary life as hidden within its surfaces. . . . Even in the slipperiest of Mr. Murakami’s stories, pinpoints of detail flash out . . . warm with life, hopelessly–and wonderfully–unstable.” –The New York Times Book Review

“A stunning writer at work in an era of international literature.” –Newsday

“Enchanting…intriguing…all of these tales have a wonderfully surreal quality and a hip, witty tone. Mr. Murakami has pulled off a tricky feat, writing stories about people who are bored but never boring. He left me lying awake at night, hungry for more.” –Wall Street Journal

“The Elephant Vanishes, through [its] bold originality and charming surrealism, should win the author new readers in this country.” –Detroit Free Press