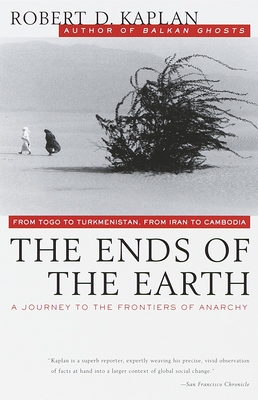 The Ends of the Earth

From Togo to Turkmenistan, from Iran to Cambodia, a Journey to the Frontiers of Anarchy (Vintage Departures)

Author of Balkan Ghosts, Robert D. Kaplan now travels from West Africa to Southeast Asia to report on a world of disintegrating nation-states, warring nationalities, metastasizing populations, and dwindling resources. He emerges with a gritty tour de force of travel writing and political journalism. Whether he is walking through a shantytown in the Ivory Coast or a death camp in Cambodia, talking with refugees, border guards, or Iranian revolutionaries, Kaplan travels under the most arduous conditions and purveys the most startling truths. Intimate and intrepid, erudite and visceral, The Ends of the Earth is an unflinching look at the places and peoples that will make tomorrow's headlines--and the history of the next millennium.

Robert D. Kaplan is the bestselling author of sixteen books on foreign affairs and travel translated into many languages, including Asia’s Cauldron, The Revenge of Geography, Monsoon, The Coming Anarchy, and Balkan Ghosts. He is a senior fellow at the Center for a New American Security and a contributing editor at The Atlantic, where his work has appeared for three decades. He was chief geopolitical analyst at Stratfor, a visiting professor at the United States Naval Academy, and a member of the Pentagon’s Defense Policy Board. Foreign Policy magazine has twice named him one of the world’s Top 100 Global Thinkers.
Loading...
or
Not Currently Available for Direct Purchase