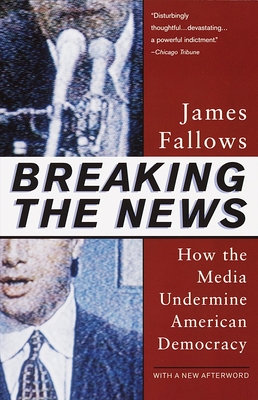 How the Media Undermine American Democracy

Why do Americans mistrust the news media? It may be because show like "The McLaughlin Group" reduce participating journalists to so many shouting heads. Or because, increasingly, the profession treats issues as complex as health-care reform and foreign policy as exercises in political gamesmanship. These are just a few of the arguments that have made Breaking the News so controversial and so widely acclaimed. Drawing on his own experience as a National Book Award-winning journalist--and on the gaffes of colleagues from George Will to Cokie Roberts--Fallows shows why the media have not only lost our respect but alienated us from our public life.

"Important and lucid...It moves smartly beyond the usual attacks on sensationalism and bias to the more profound problems in modern American journalism...dead-on."--Newsweek

James Fallows is a national correspondent for The Atlantic. He has reported from around the world and has worked in software design at Microsoft, as the editor of U.S. News & World Report, and as a speechwriter for President Jimmy Carter. He is currently a news analyst for NPR’s Weekend All Things Considered and a visiting professor at the University of Sydney.
Loading...
or
Not Currently Available for Direct Purchase