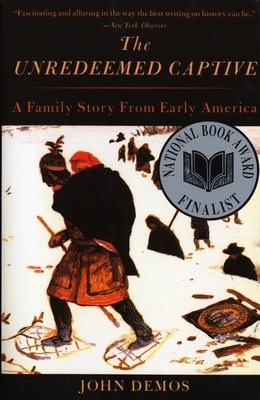 A Family Story from Early America

Nominated for the National Book Award and winner of the Francis Parkman Prize.

The setting for this haunting and encyclopedically researched work of history is colonial Massachusetts, where English Puritans first endeavoured to "civilize" a "savage" native populace. There, in February 1704, a French and Indian war party descended on the village of Deerfield, abducting a Puritan minister and his children. Although John Williams was eventually released, his daughter horrified the family by staying with her captors and marrying a Mohawk husband.

Out of this incident, The Bancroft Prize-winning historian John Devos has constructed a gripping narrative that opens a window into North America where English, French, and Native Americans faced one another across gilfs of culture and belief, and sometimes crossed over.

Praise For The Unredeemed Captive: A Family Story from Early America…

"Fascinating and alluring in the way the best writing on history can be."--The Observer

"Powerful and useful. . . .Demos has achieved the kind of balancing act that historians constantly strive for but seldom achieve."--New Republic

"This thought-provoking study explores the multiple communities to which apparently simple people belonged and how their domestic lives were overtaken by political events. Fascinating, lively, and especially timely to an age struggling to understand the implications of its own cross-cultural encounters."--Kirkus

"A masterpiece...recovering for us the poignant story of lives and families shattered and then painfully knitted together again in the complex cultural encounters between English, French, and Mohawk peoples in eighteenth-century America. There is nothing quite like it in our literature. It is a stunning achievement that should change forever the way we write and tell stories about the American past."--William Cronon

John Putnam Demos is Samuel Knight Professor of History at Yale University in New Haven, Connecticut. He is the author of A Little Commonwealth: Family Life in Plymouth Colony and Entertaining Satan: Witchcraft and the Culture of Early New England.
Loading...
or
Not Currently Available for Direct Purchase