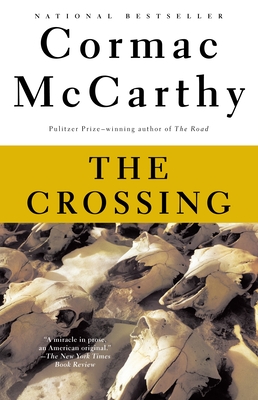 NATIONAL BESTSELLER • The second volume of the award-winning Border Trilogy—from the Pulitzer Prize–winning author of The Road—fulfills the promise of All the Pretty Horses and at the same time give us a work that is darker and more visionary, a novel with the unstoppable momentum of a classic western and the elegaic power of a lost American myth.

In the late 1930s, sixteen-year-old Billy Parham captures a she-wolf that has been marauding his family's ranch.  But instead of killing it, he decides to take it back to the mountains of Mexico.  With that crossing, he begins an arduous and often dreamlike journey into a country where men meet ghosts and violence strikes as suddenly as heat-lightning--a world where there is no order "save that which death has put there."

An essential novel by any measure, The Crossing is luminous and appalling, a book that touches, stops, and starts the heart and mind at once.

Cormac McCarthy was born in Rhode Island in1933 and spent most of his childhood near Knoxville, Tennessee. He served in the U.S. Air Force and later studied at the University of Tennessee. In 1976 he moved to El Paso, Texas, where he lives today.  McCarthy's fiction parallels his movement from the Southeast to the West--the first four novels being set in Tennessee, the last three in the Southwest and Mexico. The Orchard Keeper (1965) won the Faulkner Award for a first novel; it was followed by Outer Dark (1968),  Child of God (1973), Suttree (1979), Blood Meridian (1985), and All the Pretty Horses, which won both the National Book Critics Circle Award and the National Book Award for fiction in 1992. The Crossing is his seventh novel and the second in McCarthy's Border Trilogy.
Loading...
or support indie stores by buying on