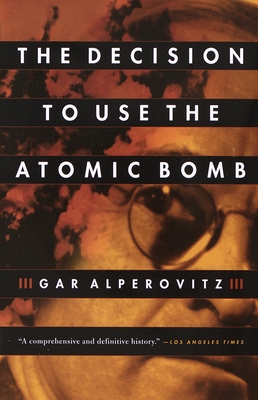 The Decision to Use the Atomic Bomb

With a new preface by the author

Controversial in nature, this book demonstrates that the United States did not need to use the atomic bomb against Japan. Alperovitz criticizes one of the most hotly debated precursory events to the Cold War, an event that was largely responsible for the evolution of post-World War II American politics and culture.

Praise For The Decision to Use the Atomic Bomb…

"A massively detailed yet fascinating and readable work of scholarship."--San Francisco Chronicle

Gar Alperovitz, author of What Then Must We Do? Straight Talk About the Next American Revolution and The Decision to Use the Atomic Bomb, is the Lionel R. Bauman Professor of Political Economy at the University of Maryland, College Park. He is a former fellow of King’s College, Cambridge; a founding fellow of Harvard’s Institute of Politics; a fellow at the Institute for Policy Studies; and a guest scholar at the Brookings Institution. also served as a legislative director in the US House of Representatives and the US Senate, and as a special assistant in the  US Department of State. Alperovitz is a founding principal of the Democracy Collaborative at the University of Maryland, and a member of the board of directors for the New Economics Institute (NEI). More information at garalperovitz.com.
Loading...
or support indie stores by buying on