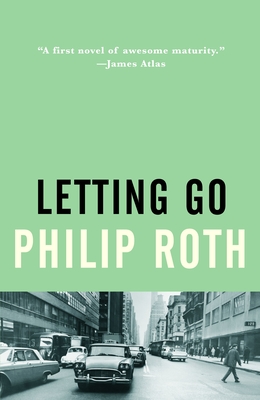 Letting Go is Roth's first full-length novel, published just after Goodbye, Columbus, when he was twenty-nine. Set in 1950s Chicago, New York, and Iowa city, Letting Go presents as brilliant a fictional portrait as we have of a mid-century America defined by social and ethical constraints and by moral compulsions conspicuously different from those of today.

Newly discharged from the Korean War army, reeling from his mother's recent death, freed from old attachments and hungrily seeking others, Gabe Wallach is drawn to Paul Herz, a fellow graduate student in literature, and to Libby, Paul's moody, intense wife. Gabe's desire to be connected to the ordered "world of feeling" that he finds in books is first tested vicariously by the anarchy of the Herzes' struggles with responsible adulthood and then by his own eager love affairs. Driven by the desire to live seriously and act generously, Gabe meets an impassable test in the person of Martha Reganhart, a spirited, outspoken, divorced mother of two, a formidable woman who, according to critic James Atlas, is masterfully portrayed with "depth and resonance."

The complex liason between Gabe and Martha and Gabe's moral enthusiasm for the trials of others are at the heart of this tragically comic work.

“Letting Go is further proof of Mr. Roth's astonishing talent…. Its emotional tension is nerve-racking, its psychological insight convincing. Mr. Roth has a phenomenal ear for colloquial dialogue. He is an effective storyteller…. Letting Go seethes with life.… The most talented novelist under 30 in America.” —The New York Times

"A rich book, full of incident, wry and sad and even in its most desolating scene somehow amusing." —Elizabeth Hardwick, Harper's

"[Roth] has the finest eye for the details of American life since Sinclair Lewis." —Stanley Edgar Hyman

PHILIP ROTH won the Pulitzer Prize for American Pastoral in 1997. In 1998 he received the National Medal of Arts at the White House and in 2002 the highest award of the American Academy of Arts and Letters, the Gold Medal in Fiction. He twice won the National Book Award and the National Book Critics Circle Award. He won the PEN/Faulkner Award three times. In 2005 The Plot Against America received the Society of American Historians’ Prize for “the outstanding historical novel on an American theme for 2003–2004.” Roth received PEN’s two most prestigious awards: in 2006 the PEN/Nabokov Award and in 2007 the PEN/Bellow Award for achievement in American fiction. In 2011 he received the National Humanities Medal at the White House, and was later named the fourth recipient of the Man Booker International Prize. He died in 2018.
Loading...
or
Not Currently Available for Direct Purchase