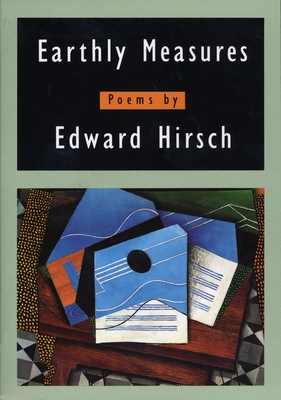 “These are poems of immense wonder and rigor. To say that they are religious poems is only to recognize their grandeur and generosity, and their heart-breaking longing.”
—Patricia Hampl, The New York Times Book Review

“With Earthly Measures, Edward Hirsch breaks through the ring of fire and captures his Muse. The voice is now uncannily his own; uncanny because we believe we have heard it before, yet the accents are unearthly and utterly fresh. Like his poem on Art Pepper, this voice also hears the chords of Stevens and Celan, but knows that ‘play solo means going on alone, improvising.’”
—Harold Bloom

“Edward Hirsch is one of the finest poets we have! He has wonderful gifts to offer us: a strong, touching narrative voice; alert, mindful eye; the moral energy that informs his manner of writing and his choice of subjects; a desire to reach his readers, bring them into the world he observes, creates.”
—Robert Coles

“I can’t think of any contemporary whose poems have such an unfeigned urgency of feeling. At the same time, Hirsch’s poems have a considered richness in them, and greatly repay rereading.”
—Richard Wilbur

Edward Hirsch has published five previous books of poems: For the Sleepwalkers (1981), Wild Gratitude (1986), which won the National Book Critics Circle Award, The Night Parade (1989), Earthly Measures (1994), and On Love(1998). He has also written three prose books, including How to Read a Poem and Fall in Love with Poetry (1999), a national best-seller, and The Demon and the Angel: Searching for the Source of Artistic Inspiration (2002). A frequent contributor to the leading magazines and periodicals, including The New Yorker, DoubleTake, and American Poetry Review, he also writes the Poet's Choice column for the Washington Post Book World. He has received the Prix de Rome, a Guggenheim Fellowship, an American Academy of Arts and Letters Award for Literature, and a MacArthur Fellowship. A professor in the Creative Writing Program at the University of Houston for seventeen years, he is now President of the John Simon Guggenheim Memorial Foundation.
Loading...
or
Not Currently Available for Direct Purchase