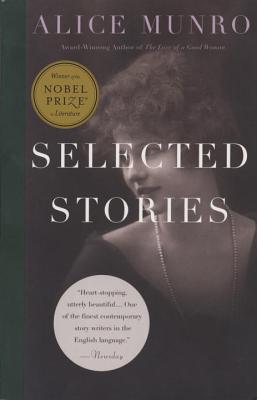 WINNER OF THE NOBEL PRIZE(r)IN LITERATURE 2013
Spanning almost thirty years and settings that range from big cities to small towns and farmsteads of rural Canada, this magnificent collection brings together twenty-eight stories by a writer of unparalleled wit, generosity, and emotional power. In her Selected Stories, Alice Munro makes lives that seem small unfold until they are revealed to be as spacious as prairies and locates the moments of love and betrayal, desire and forgiveness, that change those lives forever. To read these stories--about a traveling salesman and his children on an impromptu journey; an abandoned woman choosing between seduction and solitude--is to succumb to the spell of a writer who enchants her readers utterly even as she restores them to their truest selves.

Alice Munro grew up in Wingham, Ontario, and attended the University of Western Ontario. She has published thirteen collections of stories as well as a novel, "Lives of Girls and Women, "and two volumes of "Selected Stories." During her distinguished career she has been the recipient of many awards and prizes, including three of Canada s Governor General s Literary Awards and two of its Giller Prizes, the Rea Award for the Short Story, the Lannan Literary Award, England s W. H. Smith Book Award, the National Book Critics Circle Award, and the Man Booker International Prize. In 2013 she was awarded the Nobel Prize for Literature. Her stories have appeared in "The New Yorker, The Atlantic Monthly, The Paris Review, Granta, "and other publications, and her collections have been translated into thirteen languages. She lives in Clinton, Ontario, near Lake Huron.