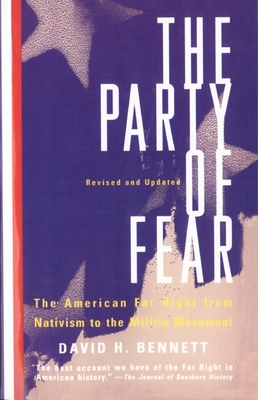 The Party of Fear

From Nativist Movements to the New Right in American History

Why, for two hundred years, have some American citizens seen this country as an endangered Eden, to be purged of corrupting peoples or ideas by any means necessary?

To the Know-Nothings of the 1850s, the enemy was Irish immigrants. To the Ku Klux Klan, it was Jews, blacks, and socialists. To groups like the Michigan Militia, the enemy is the government itself -- and some of them are willing to take arms against it. The Party of Fear -- which has now been updated to examine the right-wing resurgence of the 1990s -- is the first book to reveal the common values and anxieties that lie beneath the seeming diversity of the far right. From the anti-Catholic riots that convulsed Philadelphia in 1845 to the 1995 bombing in Oklahoma City, it casts a brilliant, cautionary light not only on our political fringes but on the ways in which ordinary Americans define themselves and demonize outsiders.

Praise For The Party of Fear: From Nativist Movements to the New Right in American History…

"Mr. Bennett ... has an eye for arresting detail and subtle contradiction ... a sober, thought-provoking and above all empathetic analysis." -- The New York Times Book Review

-- The Journal of American History

David H. Bennett is professor emeritus of history at Syracuse University, specializing in American political extremism and military, and  twentieth-century American history. Books he has written include Demagogues in the Depression: American Radicals and the Union Party, 1932–1936 and The Party of Fear: The American Far Right from Nativism to the Militia Movement.
Loading...
or support indie stores by buying on