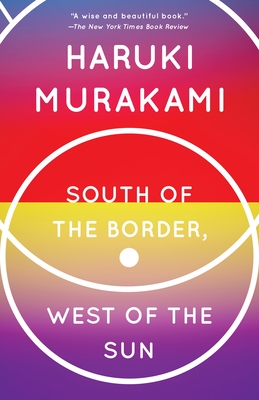 South of the Border, West of the Sun

South of the Border, West of the Sun is the beguiling story of a past rekindled, and one of Haruki Murakami’s most touching novels.

Hajime has arrived at middle age with a loving family and an enviable career, yet he feels incomplete. When a childhood friend, now a beautiful woman, shows up with a secret from which she is unable to escape, the fault lines of doubt in Hajime’s quotidian existence begin to give way. Rich, mysterious, and quietly dazzling, in South of the Border, West of the Sun the simple arc of one man’s life becomes the exquisite literary terrain of Murakami’s remarkable genius.

Praise For South of the Border, West of the Sun: A Novel (Vintage International)…

“A probing meditation on human fragility, the grip of obsession, and the impenetrable, erotically charged enigma that is the other.” –The New York Times

“His most deeply moving novel.” –The Boston Globe

“Mesmerizing. . . . This is a harrowing, a disturbing, a hauntingly brilliant tale.” –The Baltimore Sun

“A fine, almost delicate book about what is unfathomable about us.” –The Philadelphia Inquirer

“Portrayed in a fluid language that veers from the vernacular . . . to the surprisingly poetic.” –San Francisco Examiner & Chronicle

“Haunting and natural. . . . South of the Border, West of the Sun so smoothly shifts the reader from mundane concerns into latent madness as to challenge one’s faith in the material world . . . contains passages that are among his finest.” –The New York Observer

Haruki Murakami lives in Oiso, Japan, just outside of Tokyo.
Loading...
or support indie stores by buying on