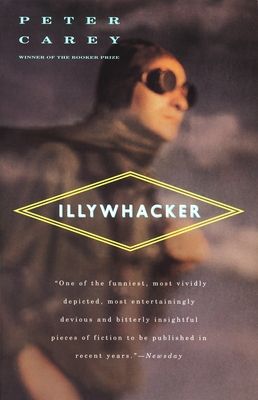 In Australian slang, an illywhacker is a country fair con man, an unprincipled seller of fake diamonds and dubious tonics. And Herbert Badgery, the 139-year-old narrator of Peter Carey's uproarious novel, may be the king of them all. Vagabond and charlatan, aviator and car salesman, seducer and patriarch, Badgery is a walking embodiment of the Australian national character—espcially of its proclivity for tall stories and barefaced lies.

As Carey follows this charming scoundrel across a continent and a century, he creates a crazy quilt of outlandish encounters, with characters that include a genteel dowager who fends off madness with an electric belt and a ravishing young girl with a dangerous fondness for rooftop trysts. Boldly inventive, irresistibly odd, Illywhacker is further proof that Peter Carey is one of the most enchanting writers at work in any hemisphere.

"One of the funniest, most vividly depicted, most entertainingly devious and bitterly insightful pieces of fiction to be published in recent years." —Newsday

"Carey can spin a yarn with the best of them.... Illywhacker is a big, garrulous, funny novel.... If you haven't been to Australia, read Illywhacker. It will give you the feel of it like nothing else I know." —The New York Times Book Review

PETER CAREY is the author of thirteen previous novels. In addition to the Booker Prize, his honors include the Commonwealth Writers' Prize and the Miles Franklin Literary Award. Born in Australia, he has lived in New York City for more than twenty-five years.
Loading...
or
Not Currently Available for Direct Purchase